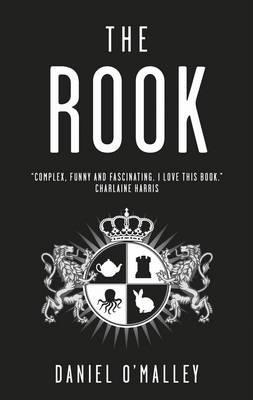 The body you are wearing used to be mine.

But you probably care little about this body’s past… After all, I’m writing this letter for you to read in the future.

If you are reading this you have already survived several immediate threats, but you are in danger. Just because you are not me does not make you safe. Along with this body, you have inherited certain problems and responsibilities.

Go find a safe place, and then open the second letter.

Myfanwy Thomas has just woken up with no knowledge of who she is. She is soaking wet and surrounded by dead people in latex gloves. She has two letters in her coat pocket addressed to herself. She is given a choice; claim a new life or discover Myfanwy’s secrets and carry on her life. When she is attacked again on the way to the bank, she must rethink her decisions and learn who, and what, she really is.

The Rook is a fantastic fantasy debut, centred around a special branch of the British Secret Service; The Checquy. The Checquy is populated by people with special powers with a hierarchy based on chess pieces. Those not in the Court who still have powers are Pawns and there are normal humans who work as Retainers. It is crucial that their hidden world stays hidden from the general public. Myfanwy soon learns that her previous self had earned a place in the court through her excellent administration skills.

Myfanwy left herself a series of letters and a thick purple binder to guide her way. These form an effective method of relaying back-story, all with a wonderfully humorous tone. It’s gripping and genuinely amusing in places. We learn that Myfanwy was shy and timid, but through her writing you see a different person. Indeed, I think her memory loss helped her embrace her true self. Yes, Myfanwy ends up impersonating herself (if that’s even possible), raising a few eyebrows and muddling through. I love that she has a somewhat normal job; the genre is full of kick-ass heroines that are PIs or assassins. Myfanwy is just a very special office worker. Her PA, Ingrid is pretty fantastic too, taking everything in her stride, just as any good PA should!

And I’m supposed to being going out to dinner with Lady Linda Farrier.

We’re being invaded by evil Belgian fleshcrafters, and I have nothing to wear.

There are some fantastic supernatural powers thrown into the mix. Gestalt is one person with four bodies; a huge asset out in the field as it knows what’s going on from each body’s perspective. But he is creepy. There’s sinister purple mould and a wealth of other weird and wonderful things to look forward to.

I can even forgive the occasional lapses into American-English. There is no such thing as downtown Stoke-on-Trent! At least Myfanwy manages to use lifts instead of elevators (except for one slip-up). The ending, however, relied on what I call the Bond Villain Approach; you are about to die therefore I will tell you everything. I don’t mind this to some extent but this went on for pages. And to top it off, after that was over, another character did a similar thing. An inelegant end an otherwise fantastic novel.

The Rook is published by Head of Zeus and is currently available in hardback and ebook formats. Thanks go to the publisher for providing a copy for review. I cannot wait for the next book (there better be a next book).