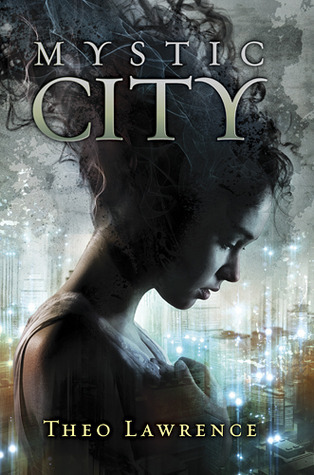 New York is flooded and the city is ruled by the upper classes. Below, the mystics live in the depths, in buildings threatening to crumble into the sea. But mystics must have their powers drained for they are dangerous and a menace to society left free to do as they please. Aria is engaged to Thomas; a union that will build a bridge between two rival families. The only problem is, Aria can’t remember falling in love with him, or much about him at all. Her memory ruined by an overdose, she meets a boy in the depths; a mystic. Is he the key to unlocking her memories and will she fall in love with Thomas all over again?

What if Romeo and Juliet were a lie? Set against a backdrop of a flooded New York, it held so much promise but just fell short. Mystic City is one of those books where I really should have taken heed from all those blog reviews. I had managed to pre-order and forget all about it, so by the time it turned up I was a bit meh about it. It fell into so many of the traps of dystopian YA, the world built for the sake of it being a “dystopian setting”, rather than having something political to say using the dystopian society. You may know by now this is one of my pet peeves…

I liked the idea of a future New York that has been flooded and its resemblance to Venice (gondoliers replace taxis) but the world didn’t make a whole lot of sense. It becomes clear that it is only partially flooded as there is one place where they still have grass and trees. This means that just a little bit further in land, everything is peachy (not that it’s mentioned, we are to assume New York is the entire universe of Mystic City). So why do all these rich bigwigs stay in the city? Why wouldn’t they resettle elsewhere? Confining themselves to the penthouses instead of starting afresh seems just a little bit odd.

The story does touch a little on the oppression of a group deemed lesser by those in charge. The mystics are segregated and drained. What makes them, them, is taken away. I liked the idea of the Romeo and Juliet story being used as a sort of propaganda between the warring families. They will unite the righteous against the rebels. It’s just that the surrounding story was a little bland and predictable. It’s easy to read but nothing to write home about.

What is "adult" fiction?

Some wandering thoughts on crime fiction

Every Heart a Doorway

Sorcerer to the Crown