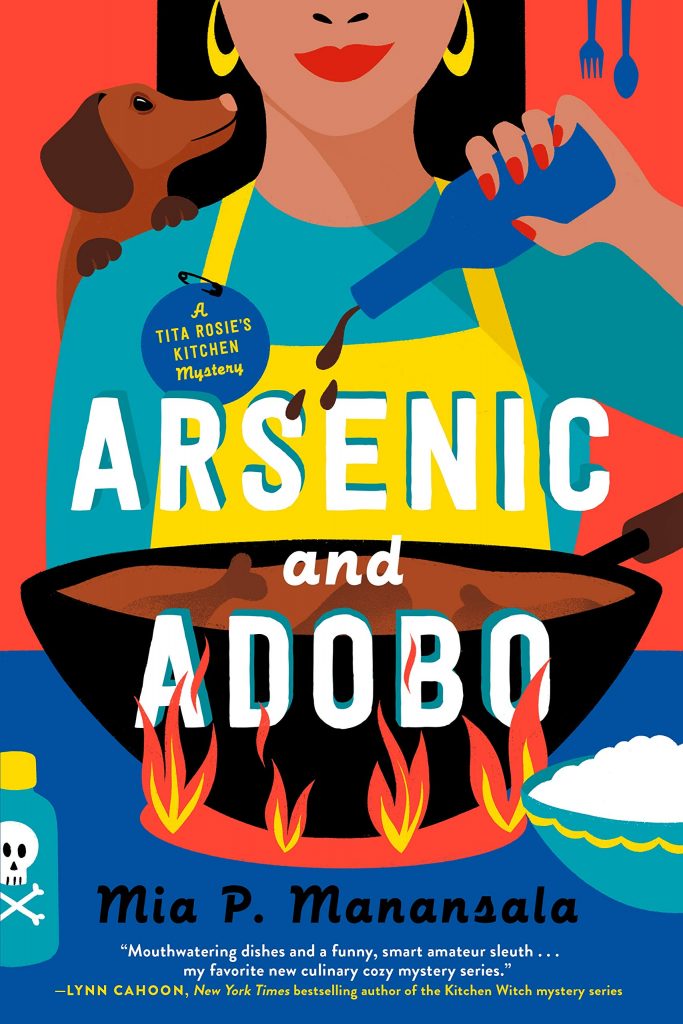 After breaking up with her boyfriend, Lila Macapagal moves back in with her family in the small town of Shady Palms, her dreams of becoming a pastry chef drifting away. Her Tita Rosie’s restaurant is in financial trouble and she’s been tasked with saving it, when a food critic, who happens to also be her ex, drops dead right in the middle of his dessert. Soon Lila is tasked with proving her innocence and finding out the real culprit.

I will admit to picking up Arsenic and Adobo due to that cover, it’s bright, intriguing and has a cute doggo. I really don’t read that many cozy mysteries after dipping my toe in the genre with Agatha Raisin over a decade ago and not enjoying that at all. But I’m glad I gave the genre a second chance. This was really cute and fun, and yes Lila does have a Dachshund, named Longanisa after a type of Filipino sausage.

There is so much yummy sounding food in this book. As well as her family’s Filipino restaurant, Lila’s investigation takes her all around town, having to eat at all the places Derek trashed in his reviews. It turns out they all serve amazing food, so he was definitely up to something.

The mystery rattled along at a good pace, with just enough clues to take a guess without being too obvious. Of course, we don’t believe Lila did it!

I loved the emphasis on friendship too. Lila’s family might be keen to help her find a new man, but she spends time making friends, including inviting the dentist out to dinner because he doesn’t really know anyone outside his family. And OK, there might have been some romantic hints, but it’s definitely more mystery than romance.

I listened to it on audio and Danice Cabanela does a great job making Lila come across as friendly and kind, even if sometimes she’s a little indignant.

The Other Black Girl

Teenage detectives and an alpaca friend... a weekly check-in