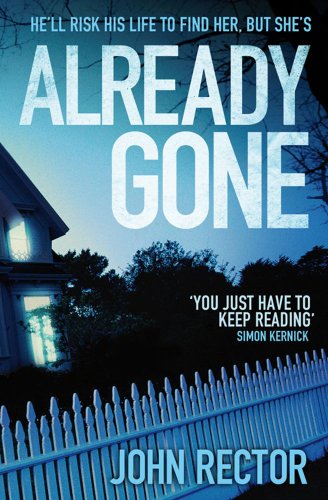 Jake is minding his own business after a night in a bar when two men grab him and cut off his ring finger. Jake’s just a normal guy and believes that it’s just a random act of violence but the police aren’t so sure. When his wife goes missing, he must start digging up the past and throw himself into a world of violence.

It’s a dramatic start and the plot is fairly fast paced but after a while I just didn’t care whether or not the main characters died or not. It’s much more action based than introspective so it’s hard to connect. The idea of a normal man being targeted out of the blue could have been an intriguing story but it soon turns out that there’s a whole lot of back-plot which makes it less interesting to me.

I’m sure there are plenty of readers who will devour Already Gone. It definitely has the feel of an action flick, the lack of character development would make it perfect for the big screen. I don’t know if it’s the slightly mysterious side to Gabby that made him the most well-rounded character but I found myself wanting to know more about him and carried on for his sake.

Already Gone won’t be available in the UK until December (I got my review schedule confused, OK, I admit it’s not really much of a schedule…) but you can pre-order it if it takes your fancy. Thanks go to Simon & Schuster for sending me a copy to review.