Whilst the blog may have a been a little quiet this week, I’ve been ploughing through Rachel Caine’s Morganville Vampires series and am now on the fourth book (did I say, blame Hannah?). Not only are they easy reading but they do all seem to end with a cliffhanger. If you’ve got the next book waiting it’s so easy just to pick it up to find out what happens next. 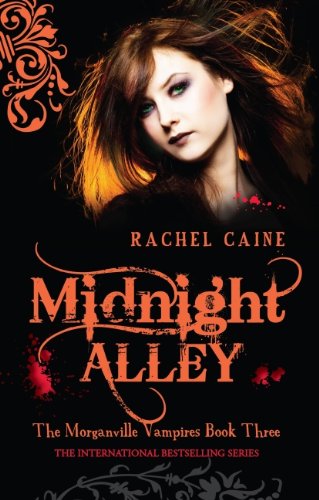 The Dead Girls’ Dance is the second book in the series. You’ll most likely be picking this one up with the intention of finding out what happens about Michael. I won’t give it away but you will get answers. Shane’s vampire hunting father is in town and the vamps aren’t happy and Shane is an easy target. Of course Claire still manages to get in an awful lot of trouble. I think this is probably a three star book for me as it did feel a little “samey”.

Midnight Alley starts to move the story along a bit. To keep a series going there needs to be some evolution and the black and white world of vamps = bad and human = good is starting to slip. Claire finds herself worrying about the wellbeing of certain vampires and Eve’s brother has been let out of prison and is up to no good. Claire also gets to learn a little about the world of alchemy and what is really lurking down that alley. Probably the best yet, so gets a shiny four stars.

In true Young Adult style, the Morganville books deal with some teenage issues amongst all the vampire politics and action. There are cautionary tales about date rape and drug abuse and a strong message about not doing things are you’e not old enough to do. I’m starting to find it a little unbelieveable that a 16 year old girl living with her hot 18 year old boyfriend is not having sex because they are being law abiding. Maybe because I’m British, where not only is the age of consent 16 but it is also regularly ignored by teenagers. Shane seems a bit holier than thou at times and it doesn’t fit with the rest of his personality. Especially as they make it out like Shane is far too old for her. In the same way, there seems to be an over-reaction to 18 year olds drinking beer (again there is a difference to legal drinking age between where I live and where the books are set).

The Curse of the Eclectic Reader

The Library of the Dead

Sorting out subscribers… a weekly check-in

Excuse Me While I Ugly Cry

Hay-on-Wye and waterfalls… a weekly check-in

She'd be straight to the abandoned warehouses to find the cheesy snacks. Probably will die from eating too much. https://t.co/J3MJSakgPw

So I basically want to read everything @orbitbooks is publishing next year 😍 The Stardust Thief by @chelsabdullah… https://t.co/Vx9cyLLorp