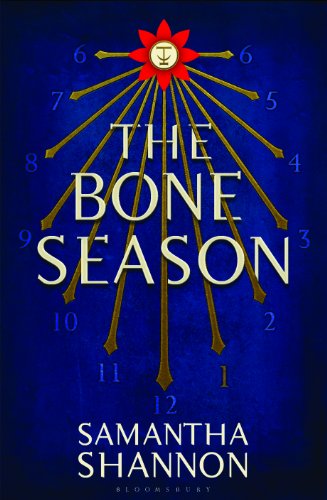 The year is 2059. Clairvoyance is a crime. Those with the gift have three options; hide their voyance and try to live a normal life, turn themselves in to Scion and join the NVD hunting down their kind or turn to a life of crime with the mime-lords. Paige chose crime, now the favoured mollisher of Seven Seals, she uses her ability to effect the aether to benefit Jaxxon Hall, risking her life each time she does a job. Until one night everything changes.

Wow, where to begin? The Bone Season is the best urban fantasy of the year for me. Set in the future with an alternate past, so much planning has gone into this book and the world building is so well done. There’s never any feeling of info-dump and the history is woven into the characters’ stories. The monarchy was disbanded after King Edward VII went mad and Scion took over to control the voyant problem. It’s a cover story that may or may not have truth to it (really I would read a novel with just the backstory it’s so good) and Paige soon learns where Scion got their ideas from. There’s a place worse than the Tower where the voyants get taken.

Paige and many of the supporting characters have tough choices to make. There isn’t a black and white good or evil choice for them. I didn’t have a single eye rolly moment over what Paige does, she’s not stupid or thoughtless. But the home she is desperate to get back to isn’t all sunshine and puppies either. She doesn’t feel good about killing and she is caring; one act of compassion sets her on her way.

If you’re struggling with the terms at the start, there is a glossary in the back, but it all comes together quickly and most the voyant types have slang names which are descriptive of their powers. They can all use the aether to affect the spirit world, so there are ghosts but also other powers of the mind going on. I’ve not read anything quite like it before and it’s brilliant.

I won’t go into details on the Rephaim but what a fantastic creation. It’s so easy to pluck an existing supernatural creature out of your mind and use them but instead Samantha Shannon has given us a fearsome new foe. And the way they segregate the humans, marking out their status by colour, is something many have done throughout history. Turn them against each other and you don’t have to do the work yourself. But it’s the interaction between Paige and her keeper, Warden, that really makes this book.

Apparently there are seven books planned and I cannot wait for more. It’s slightly depressing that the author is a mere 22 and has written such an accomplished debut. What was I doing at that age? If you like urban fantasy at all, please read this, you won’t regret it.

The Bone Season is published by Bloomsbury and is out now in hardback and ebook editions. Thanks go to the publisher for providing a copy for review via NetGalley.

The Long Way to a Small, Angry Planet

The advice for getting dogs desensitised to fireworks assumes your dog can't tell the difference between TV sounds… https://t.co/klnZ1U12K1

Can someone explain the "breakthrough author" category? Is it author that was doing reasonably well already but had… https://t.co/mKaBhFNoyk

Wow, response to Waterstones enquiries is "We will endeavour to ensure your order is processed." Well thanks for t… https://t.co/MUT7LHTWQF