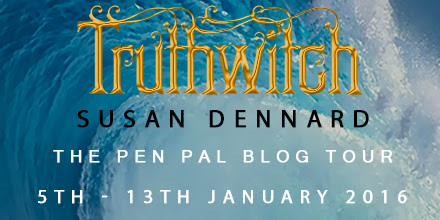 Today I’m teaming up with Hannah @ The Irish Banana as part of the transatlantic blog tour for Susan Dennard’s new fantasy novel, Truthwitch. We got one question to ask Susan and ours is…


If a Threadwitch was watching us read, what would she see in our threads?

Fun question! So when a Threadwitch looks at someone, she (because they’re all female!) sees winding, glowing strands hovering above the person. The color of the Threads indicates what a person is feeling.

Because Iseult (and other Threadwitches) is so accustomed to reading a person’s emotion through their Threads, she’s not great with facial expressions. Not only can’t she read them easily, but she can’t even make them herself. She’s just always known “the weave of the world” by simply glancing at Threads.

For starters, the different covers don’t suggest two completely different books like so often happens. They overall have the same vibe about them. The UK cover might suggest that she has power over water rather than truth, although the sea is quite a big factor in the story, whilst the US cover attempts to show the threads. Aesthetically, I do prefer the UK version, she just looks a lot more normal with clothes that are how I would imagine. I guess the US cover might be trying to show the salamander cloak but it kind of looks like she’s wearing a sheet, and one that would tangle round her legs. Plus her pose is a bit strained.

So, onto my review…

Despite the title, it’s not Safiya’s truthwitchery that stood out for me but the threads which Iseult can see. They show the bonds between families and friends, yet she can’t see her own, and they pulse all the colours of the rainbow, indicating emotions. Safiya was be able to tell the lie in someone’s words, but Iseult can see the truth in someone’s emotions.

It took me a whilst to get into because so many characters are introduced in the first few chapters as well as trying to get to grips with the magical world-building. If you read a lot of epic fantasy you are probably more accustomed to this; I spent ages being confused by the vast cast of A Game of Thrones at first.

There’s more development in Iseult’s powers than Safiya’s. As an unregistered Truthwitch, Safiya must keep her secret hidden otherwise she will become a tool for the powerful to exploit. This gives momentum for their story, escaping an unexpected and unwanted marriage agreement and seeking a new home.

The presence of a Bloodwitch added a darker aspect to the story, a seemingly unkillable foe who can not only track the witches but know their very being. It struck me that a lot of the powers in this world are about revealing secrets that people would otherwise hide. The three main witches of the story all have the power to intrude on things we would otherwise keep private.

Truthwitch is very much a first book in a series, laying the threads, so to speak, for what comes next. There’s plenty of intriguing elements that I want to know more about and to see where the two girls’ journeys go.

Truthwitch is published by Tor and will be available on the 14th January 2016 in hardback and ebook formats. Thanks go to the publisher for providing a copy for review. Please go check out Hannah’s blog and see her thoughts on the book too.