I am slowly working my way through Jamie Oliver’s 30 Minute Meals and I felt it might be appropriate to share my experiences as the recipes are coming out of a book. They are possible in half an hour but don’t expect to get the washing up done in that time too. I’ve found I make quite a mess making them! 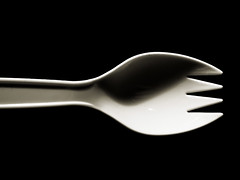 I’ve been skipping the desserts mostly because they are a little boring (eg. some fruit sliced up with some herbs) but also because the main meal and sides are more than enough. I’m cooking for one so I like to have things that will do for leftovers too. Now Jamie seems very strict at the start of the book about mixing things up but I think if you have any previous cooking knowledge, you’ll know where you can go off course and not ruin the dishes. If you’re using the book as a cookery course, maybe you’d better listen to Jamie.

The first meal I attempted was Cripsy Salmon, Jazzed-Up Rice, Baby Courgette Salad and Gorgeous Guacamole (the skipped dessert was a Berry Spritzer) which can be found on page 190. It was a good first choice as everything was tasty and it made a good cold lunch the day after. I make the courgette salad a lot now; you make the ribbons with a veg peeler which is super quick to do and then add lemon juice, mint and chilli. Sometimes I skip the chilli and sometimes I use lime depending on what’s in my fridge. I pretty much followed Jamie’s instructions on this one except I grilled peppers first instead of using jarred ones and I didn’t have any balsamic vinegar to go in the rice. Took me about 40 minutes though.

Next I made Killer Jerk Chicken, page 106, but went way off track. I decided to marinate the chicken for a few hours first and used drumsticks and thighs instead of breasts. Oh and I didn’t make the rice or corn either but both seem pretty straight forward and I don’t think they’d take longer than the designated 30 minutes. I wouldn’t be fussy about what leaves go into the salad either and I didn’t have any cress for it. However the jerk sauce was delicious!

Finally, I made the Summer Veg Lasagne with Tuscan Tomato Salad found on page 48, again skipping the dessert (Mango Frozen Yoghurt). First off, the salad is yummy but does not go with the lasagne; I don’t know what Jamie was thinking. I also skipped the anchovies which I generally don’t like unless they’re blitzed to oblivion in a sauce. The filling for the lasagne didn’t fit in my large pan either so I had to scoop some out near the end to add the cottage cheese. If I made it again I’d skip the stock as the sauce ended up a bit watery. I think the moisture in the veg along with the cream (I substitued half fat creme fraiche) and cheese is more than enough. To be honest, I’d probably just make a small portion of the veg in sauce and not bother making the lasagne in future. It all sort of falls apart when dished up anyway!

You can find some of the recipes from the book on the Channel4 Food site as well as some how to videos. The cheapest place to buy the book at the moment is from The Book People if you can get a free delivery code or they turn up at your work place frequently.

I Feel I’ve Been Neglecting You