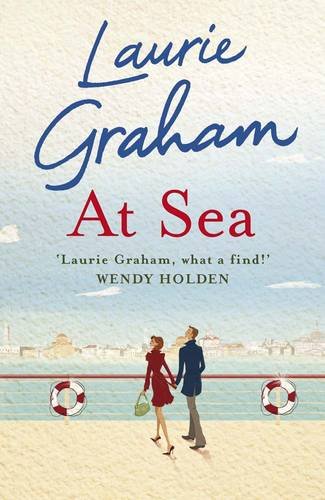 Lady Enid has been quietly accompanying her professor husband, Bernard, for years on cruises where he provides guest lectures. But when a passenger is convinced he knows Bernard from somewhere, Enid starts to wonder if it really is just a case of mistaken identity or does her husband have a hidden past?

On one hand, At Sea is a wonderfully funny parody of cruise ship life, just imagine being stuck on a ship for weeks on end with the same people and not being able to escape them! That’s exactly what Bernard thinks of his fellow passengers but Enid is much more inclined to give people a chance.

Enid has been through life accepting her lot however during this fateful cruise she begins to learn not just more about her husband but also what she wants out of life. And maybe what she wants is to let her hair down now and then. There’s some fantastic moments where Enid is learning about the internet for the first time and then goes on to try and explain things to Bernard who is having none of it. They are both examples of certain a generation who either embrace new technology and the things it can for them or shun it as nonsense.

As Enid would say, Bernard is a rather beastly character and I’m not sure you’ll feel much sympathy towards him but I loved Enid and slowly began to like her little cruise ship family even if they were a little unorthodox.

It’s really not the sort of book I would be drawn to and I think I am a little younger than the intended audience but overall I found it an enjoyable read. Definitely one to pack in the bags if you’re heading on a cruise any time soon!

At Sea will be released in paperback in the UK on 15th September 2011. Thank you to Quercus for sending me a copy to review and providing me with a few laughs.

The Shock of the Fall