Lost in a Good Book 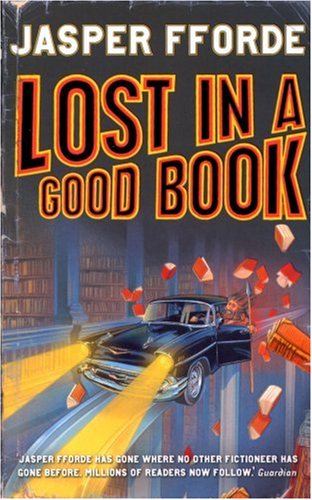 Both Thursday Next and Pickwick the dodo are expectant mothers (yes Pickwick isn’t a he after all) but they don’t have long to enjoy the good news. Thursday returns home to find her husband, Landon, no longer exists. Someone from the ChronoGuard has gone back in time and made sure the two-year old Landon didn’t survive the car crash in which he lost his father. He’s being held hostage and Thursday must find a way to return to the pages of books in order to get him back.

Lost in a Good Book is the second instalment of Jasper Fforde’s Thursday Next series, following on from The Eyre Affair. Thursday’s world is an alternate version of 1980s Swindon (the magic roundabout still exists) where literature has a special ops division to keep it safe and extinct animals have been re-engineered. As part of the Literatech, it’s part of Thursday’s job to make sure no one meddles with the classics, even if she did make the ending of Jane Eyre better.

The Indepedent may say that these are silly books for smart people but I think they are silly books for bookish people. It certainly helps to know the classics and they’re the kind of silly that will bring a smile to the face of any booklover. I’m not sure I’m ever going to see Miss Havisham in the same light again.

The Weight of Souls

Half Sick of Shadows