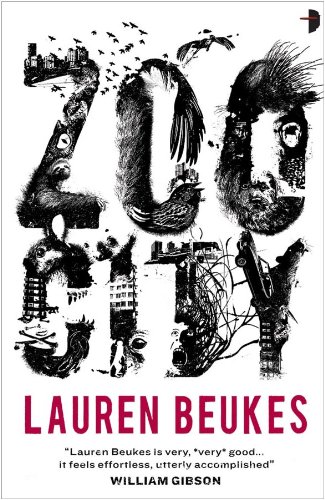 Zinzi December carries a sloth on her back. He is a mark of what she has done wrong. In an alternate Johannesburg, the animalled, or “zoos”, live as outcasts, surviving as best they can in inner city slums. With Zinzi’s animal she got a gift, the ability to find lost things. She doesn’t find lost people until one day she breaks her own rule and gets drawn into the shady underbelly of the local music scene.

Having chosen Zoo City as the first read in my Sci-Fi: Not Just For Stormtroopers challenge, I was slightly concerned at the mention of magic in the first few pages. Zoo City is a hard one to categorise, it’s fantasy with a science fiction mindset and a noir plot. Fantasy never really tries to explain the whys behind supernatural creatures and at least here, in Zinzi’s world, there have been attempts from scientists to work out what’s going on. Some of this is explained through faux extracts, articles and even a section that looks suspiciously like an Amazon product page complete with a range of customer reviews.

The mashavi, or magic, is based on a Zimbabwe myth of wandering spirits, the mashave, however it becomes a sign of guilt for the zoos. They can be singled out easily, persecuted beyond their original crimes and given no second chance to make their life good. This echoes the perceptions people have of ex-cons in our world.

Africa is a continent with many social problems and Zoo City cleverly manages to weave them into one story without treading on any toes. That’s the joy of speculative fiction, it can handle controversial and terrifying subject matters from an angle that makes an enjoyable read but also gives you pause for thought.

On a lighter note, I loved Sloth. Don’t be mistaken in thinking these are talking animals. They are pretty normal except for being linked to their humans and they communicate in normal animal ways. Yet Sloth is a fully formed character, at times being Zinzi’s conscience, even if it is self preservation behind it. I kinda want a sloth myself!

Maybe it was a good first choice after all, it might have just taught us that genres aren’t constraints and you should try not to judge a book by its genre!

As this is the group read, I’ve added some thoughts that can be considered spoilers. You can view these by clicking the button below.

You may not know this, but muti killings do sadly occur in the real world. Some still believe in traditional healing methods though only a small number resort to using human body parts in their medicine. I think the ending shows the extreme measures unstable people can take to “cure” themselves as well as the opportunistic evil of those willing to take advantage. However I had no sympathy for Odi, especially as many animalled seem to start to love their companions.

Another point related to Odi is the idea that the animals are a representation of guilt. I don’t know if I missed what he had meant to have done but he didn’t strike me as the sort of person to feel guilt. Whilst Zinzi and Benoit are normal people that have hit rock bottom and committed crimes they regret. I thought the having the ending being an act of kindness was a nice touch.

A Sky Beyond the Storm

A Reaper at the Gates

A Torch Against the Night