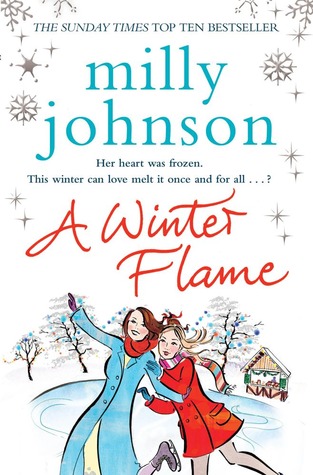 Eve doesn’t like Christmas. On top of a childhood full of disappointments, her boyfriend was killed in Afghanistan 5 years earlier on Christmas day. Unable to move on, she keeps a candle burning for him; as long as it’s alight he’s there with her in spirit. But when her great aunt dies, she leaves Eve something strange in her will: the plans to a winter theme park and the money to make it happen. There’s one catch. She must work together with a mysterious stranger and she can’t help but be suspicious.

The winter theme park is a wonderfully silly idea for a festive novel and you’ll be pleased to know it’s better than the one that kept appearing on Watchdog last year! Whilst it does have its serious side, the best parts are the fun ones. There’s a host of wonderful bit-part characters, an amazing sounding ice-cream parlour, adorable reindeer and Santas. I wish that her niece had a bigger part as she is one of those children that comes out with very adult things. Not forgetting the error ridden local newspaper that has a lot to answer for!

At one point I decided I didn’t want Eve to get a happy ever after. Her bitterness, lack of trust and all-round anti-Christmasness goes just a bit too far. Yes, she has her reasons but her grief seems out of proportion. I mean she barely knew Jonathan before he was killed and he had left his previous long-term girlfriend after knowing Eve for one night! He doesn’t sound like the kind of man that would have stuck around for ever. I think it would work better if you feel a bit more compassion towards her. Though I suppose that’s the point of Christmas miracle stories… Miserable-person-discovers-joy-of-Christmas.

Milly’s books are fun and easy reads but there’s something about her writing style which prevents me from connecting with the characters. There were a few moments that succeeded, especially Eve’s interactions with the reindeer. I probably enjoyed An Autumn Crush more but this has at least started to get me in the festive mood.

A Winter Flame is published by Simon & Schuster and is now available in paperback and ebook formats. Thanks go to the publisher for providing a copy for review.

The Other Half of Happiness

The Unfinished Symphony of You and Me