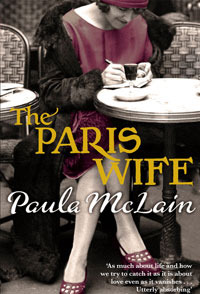 At twenty-eight, Hadley Richardson doesn’t expect to marry. After breaking her legs as a child, she’s been sheltered by her family and then plagued by tragedy. But in 1920 she visits Chicago with a friend and meets a young Ernest Hemingway. Her friend, Kate, warns her off him but they soon strike up a correspondence which leads to an impromptu marriage proposal. Hadley finds herself leaving her life behind to follow Ernest to Paris, where he can focus on his writing.

The Paris Wife is a novel based very much on fact and I understand that Hemingway’s life is very well documented and a lot of their letters still exist today. I don’t really have much interest in him or his contemporaries to be honest and I wouldn’t have read this book if it wasn’t a book group choice. The story is very biographical and maybe lacks something as a novel. There are so many real life events strung together that the sense of a structured plot gets a bit lost, much like real life.

Hemingway’s own A Moveable Feast covers the same period as The Paris Wife however this is from Hadley’s perspective. I imagine it’s quite interesting to compare the two if you are a fan of his work. Hemingway comes across as a bit of a spoiled schoolboy at times, although members of my book group said that it’s quite kind to him as he was well known as being arrogant and difficult. Hadley is the adoring wife and she freely admits that he is her life. I really wish she’d grown more of a backbone. There are moments when she defies him but most of the time I wanted to shake some sense into her.

A major problem is that Paula assumes we know what happens with Hadley and Hemingway and the prologue is a spoiler. So much of the story felt like filler whilst I waited for the inevitable to happen. Once things start to fall apart, it picked up for me personally and the last few chapters were the best parts of the book. I cried at the end. Twice. Perhaps it was the genuine quality of the letters between them (which I think are real letters) but there was something very real about their situation and feelings. Also, not knowing much about Hemingway, the epilogue was a bit of a jolt for me. I would be quite tempted to read a book of their letters if such a thing exists.

There is an awful lot of name dropping too. Practically everyone Hemingway came in contact with during this time seems to be mentioned and it’s just not necessary. They are forever going drinking with this person or that and it’s hard to keep up. As it’s from Hadley’s point of view, I would have expected a more intimate and emotional read but I felt that all Paula’s research got in the way. It’s straddling the line between biography and novel and not quite getting either right.

Most of my book group enjoyed The Paris Wife so if you’re interested in Hemingway I do think it’s worth reading. Whilst the subject matter didn’t grab me, the prose was easy and enjoyable to read and suited to the period.

The Earth is Singing