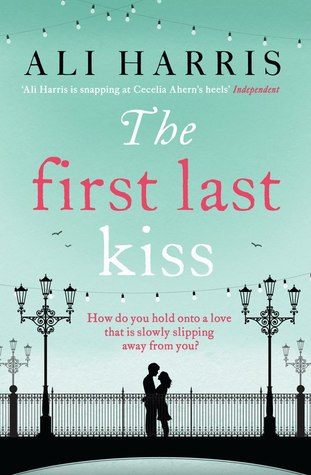 My first love – and the one I hoped would also be my last.

Molly is packing up her house in Leigh-on-Sea. The Essex town she grew up in and swore she’d leave behind forever. She is packing alone. As she puts memories away into boxes, she looks back on her life and all the kisses. Ryan Cooper, her first love.

Do kisses fade like polaroids if you don’t pay attention to them? I have kissed and been kissed so many times and yet unsatisfyingly few are imprinted on my memory.

The First Last Kiss jumps about in time from Molly’s teenage years through college, first jobs and her on/off relationship with Ryan. Those who prefer a linear narrative might struggle and I did find it was a book easy to put down in the first half. You have to keep picking up threads of different stories but it sucks you in as the book progresses. What it does really well, is portray a very real life cycle of a relationship. The close-calls and arguments, the compromises and the realisation that growing up doesn’t mean getting to live your dreams. Ryan isn’t perfect but then neither is Molly. They have differences and Molly wants more from life than Ryan, something which drives a wedge between them.

Ali Harris uses little bits of culture, technology and fashion to mark the passing of time. She cleverly chooses Take That as Ryan’s favourite band as they also span the timeframe (1994-2012). She has a playful poke at Essex boys and girls and follows a lot of the milestones of growing up; not just the romantic kind but things like holidays to Ibiza and moving out.

I kind of had an idea about what would eventually happen right at the start. Whilst it’s not necessarily predictable, the tone of the current day chapters gave me an inkling. I did find that knowing Molly is alone at the start made me feel a little like I was waiting for the story to catch up. The last quarter was definitely the best for me but do be prepared to have hankies at the ready.

The First Last Kiss is due to be published on 17th January 2013 by Simon & Schuster in paperback and ebook editions. Thanks go to the publisher for providing a copy for review.

If I Knew You Were Going To Be This Beautiful, I Never Would Have Let You Go