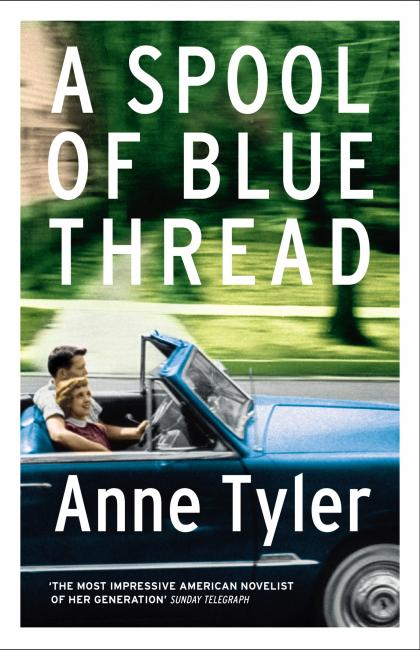 A Spool of Blue Thread

A Spool of Blue Thread tells the story of the Whitshanks and their family home in Baltimore. Red and Abby live in the house his father built, a man who arrived in 1920’s Baltimore with nothing more than a trade. Over four generations the family grows and the house fills.

He was like anybody else, Red said. Insufferable and likable. Bad and good.

In all honesty, I just don’t think this was my kind of book. If you’re a fan of family sagas, following several generations, it’s probably quite a good one. I found it an easy read but not a lot happens. And because there’s so many characters in this large, rambling family, I didn’t feel that their individual stories were told in enough depth.

There’s a key incident in the middle of the book that marked a turning point in my interest in the story though. It was all a bit sudden and a shock, but it make me take a bit more notice. Maybe things *can* happen! Then the story around the oldest Whitshank was a lot more engaging, if a little bit on the creepy side. It goes to show how family lore isn’t always entirely truthful.

Denny and Stem’s stories were fully explored. Stem isn’t really a Whitshank in the eyes of his brother, taken in as a small boy yet always seeming to be Red’s favourite. Denny’s clearly got some pent up jealousy and his acting out is explained by the end. But Stem’s childhood story was just peculiar, I’m not sure anyone would have got away with just taking in an orphan without reporting anything. And it’s just like he’s taken in and then his story ends; no explanation of him fitting into the family or otherwise.

A blood member of the Whitshank family, one of those enviable families that radiate clannishness and togetherness and just… specialness; but he trailed around their edges like a charity case.

Actually, there’s a fair few peculiar bits, some working better than others. I guess the point is this is what families are like. They all have their odd stories and scandals, conversations that are out of place and people coming and going. There are some great little anecdotes here and there that do really shine through.

There is a lot about the house, which was a symbol of the grandfather moving up in the world. It was the house he built even if it was for someone else. It was a life he aspired to, even if he never quite fitted. However, as someone currently in the process of buying their first house in an over-priced market, the house irritated me a bit. They took this huge, luxurious house for granted. And I’m unsure how the grandfather really rose from his poverty to being able to buy such a thing. I guess it’s all about the American Dream, something that I often don’t quite get when it’s a theme in books.

Plenty of people have told me this is quite a typical example of Anne Tyler’s work, so if you’ve read her already, you’ll know what to expect. Something about it to me came across as dated, maybe the lack of technology in general made it feel like it was all set in a different time rather than across a whole century.

Tell the Wind and Fire

The Wolves of Willoughby Chase

Seven Days of Us