An Artificial Night is the third book in the October Daye series and therefore this review may contain spoilers for the previous books. 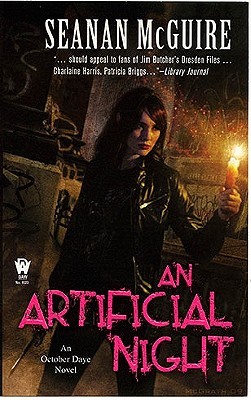 Are the fae ever sane? We live in a world that isn’t there half the time. We claim that windmills are giants, and because we say it, it’s true. Our lives become myth and legend, until even we can’t tell what we truly are from what we’re told we ought to be. How can we live that way and be considered sane?

Children are going missing, and it’s not just the fae. When Stacy’s youngest are snatched from their home and her teenage daughter left in a sleep so sleep she cannot be awakened, she immediately calls Toby into help. She must once again go to the Luidaeg for help, starting her on a journey beyond the mortal realm. There are only three paths which will take her where she needs to go and back again, but she can take each only once. Meanwhile, a harbinger of Toby’s own death has turned up on her doorstep. Will this be her last job?

“I am so tired of this gothic crap,” I muttered. “Just once, I want to meet the villain in a cheerful, brightly lit room. Possibly one with kittens.”

An Artificial Night is where this series really kicks off. It’s dark and otherworldly and our heroine is put in all kinds of mortal peril. Toby has always used nursery rhymes for her spellcasting so it is appropriate that one shapes the plot here. “How many miles to Babylon” is used to devise a way into and out of Blind Michael’s realm. And he’s a proper evil, child-snatching fae who does horrible irreversible things. There are childhood fears that come to light and the never-ending night is something to be afraid of. You really do fear for Toby’s life and those of the children. The whole other realm has an unreal and unsettling feeling to it too.

The idea of a fetch is genius. May Daye (a bit of death humour there) is an identical replica of Toby, sent to escort her to her death when the time comes. Her arrival is an omen of her imminent death and she starts to follow Toby around. Only she’s not quite exactly like Toby at all and starts to become a character in her own right. Knowing that she is about to die, Toby can throw herself into deadly situations and it highlights her desire to stop existing in her less than fulfilling life.

My favourite characters are of course those that show promise of redemption, rather than being a goody-two-shoes from the start. Read that as I love Tybalt and the Luidaeg and don’t like the obviousness of Connor. Spike the rose goblin is especially adorable, even if I imagine him as a sort of pink echidna rather than the thorny cat he is described as. I just love his quirks and his loyal presence, not to mention his love of riding in the car. There are plenty of events in this instalment that pave the way for future developments…

The Queen of the Tearling