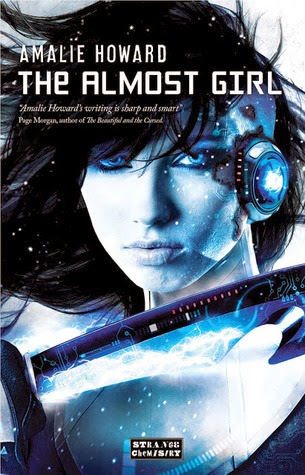 Riven’s name strikes fear into the people in Neospes, a fearsome soldier in charge of the half human Vectors, but in this dimension she is just trying to pass as a regular teenage girl. When her friend and prince, Cale, became ill, she came to this world to seek out his long-lost brother, Caden, and return with him. But she’s not the only one looking for Caden.

When I heard there was a new science fiction title coming from Strange Chemistry, I was pretty excited. Overall I liked the idea of Riven, a tough and unemotional girl, crossing dimensions and battling her conditioning. She has been taught that love is a weakness, both familial and romantic. Romance isn’t at the centre of this story and it’s very action based, however I felt a lot of the action scenes didn’t really contribute to the plot. I tend to skim long action scenes if I’m not careful, and found myself doing this on numerous occasions.

At the start, I was a bit concerned that it was going to be set in a high school and it would be another new girl fits in kind of story, but she soon shuns that world with her eye on the mission. I liked her sister; showing how much of a struggle it became to be the cold, unfeeling person she was proud to be.

With a strong opening scene that did a great job of setting the stage without going into detail, I ended up a bit disappointed with the descriptions throughout the book. I think the world-building worked better in the few flashbacks. Elsewhere she was very repetitive, stressing how things were different in “her world”. Like the water shortage, which seemed to be the number one thing that made our dimension better. But it didn’t go any further into the impacts of this, in fact, once we get to Neospes, it’s only really mentioned that roses are wasteful.

We are just meant to take for granted that the robotic war ruined everything. I wanted more back story on the war. How did their dimension end up so far ahead of ours? They say that evertion was banned after the Black Death, so that means they were centuries ahead technologically. The Vectors were interesting, reanimated corpses, powered by nanobes but there were used as mindless soldiers to fuel the action rather than explored further. So many questions, and it’s not like it’s a short book for YA. At 428 pages, it wasn’t all needed, and the middle dragged a bit.

It picked up a lot when the revelations started, one I had guessed at but the other was a surprise (and again, something I wanted more background on). The ending felt much faster paced and had me mildly gripped at last. Personally, I think it needed more time world-building and less time spent on action. It’s part of a duology (what used to be a standalone novel with a sequel) and as a debut novel, I would probably give the second book a go.