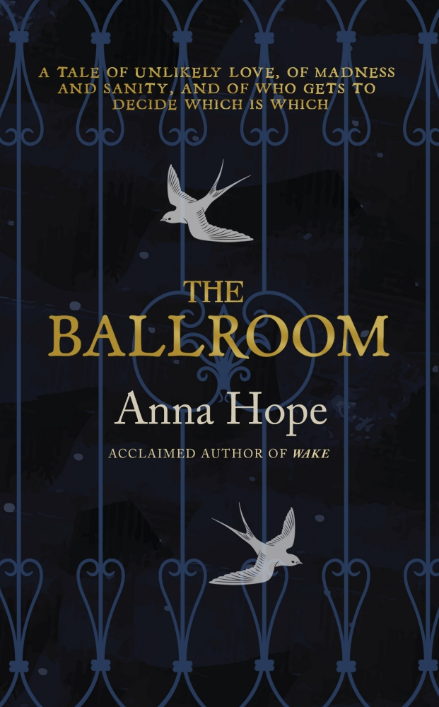 She’d heard of it. Since she was small. If you ever did anything stupid: the asylum. For the lunatics. The paupers. They’ll send you to Sharston, and you’ll never come out.

In an asylum on the Yorkshire moors, a dance is held once a week in a grand ballroom. Men and women kept apart, are allowed this one chance to be normal, to dance and feel the hands of another. Here Ella and John meet. She a poor woman who merely broke a window at the factory where she was once employed. He an Irishman, who has suffered tragedy in a land where he isn’t welcome.

1911 was a time when the asylum wasn’t necessarily the worst option, indeed some of the poorest people actually tried to get committed so they would be fed and have a roof over their heads. Sharston Asylum is loosely based on a real Yorkshire asylum with a ballroom. It’s self-sufficient with the patients contributing to the work and they even have their own farm. Perhaps it seems like a form of slavery, but not all the characters are portrayed as wanting to leave.

Things do start to change though, particularly when a young doctor, with his sights set on advancing his career, starts to think about new ways of doing things. First he strongly believes that segregation and music therapy, along with a once a week dance for those with good behaviour, is all people need. It all seems kind of pleasant. He is interested in eugenics but does not believe the drastic measure of sterilisation is necessary.

At the time, with the teachings of Charles Darwin fresh in their minds, people were beginning to believe madness and being poor were hereditary. Whilst some forms of mental illness have since been found to have some genetic causes, being poor definitely isn’t. However it is so difficult to escape one’s circumstances, so you can see how they came to this conclusion. Most people born poor would have stayed poor. And often the poor had big families too, hence increasing the problem.

Eugenics has become something strongly associated with Nazi Germany however there were plenty of believers in the United Kingdom and America. In America, there were even some cases of forced sterilisation in mental institutions, I’m not sure if it ever went that far here. This story doesn’t really go as far as exploring the consequences of forced sterilisation, it is more of an ominous threat to patients’ human rights.

Given the current climate around immigration, it’s quite fascinating to read about the prejudice towards the Irish at the turn of the century (do we still say that now we’ve changed century?). Following the Great Famine caused by potato blight there was a mass exodus from Ireland as people sought work, and food, abroad. They were treated as second class citizens, and as we see here, were considered genetically inferior to the English. Now, no one bats an eyelid if someone is Irish.

Unlike music, excessive reading has been shown to be dangerous for the female mind.

Asylums and eugenics are something I’ve read a fair bit about over the years, so I the doctor’s eventual decision seemed inevitable from quite early on. He is wrestling with his own demons and he could have done with some nice quiet, relaxation time himself. There really isn’t a lot of difference between the staff and the patients. As the cover says, who gets to decide who is mad? It seems to be determined by class, power and money.

The Ballroom is published by Transworld and will be available in hardback and ebook editions from 11th February 2016. Thanks go to the publisher for providing a copy for review via NetGalley.

The Knowledge: How to Rebuild Our World After an Apocalypse

Revival: You're Among Friends