One of the less mentioned aspects of Jodi Picoult’s My Sister’s Keeper is the inclusion of a variety of creation myths and theories. I liked the idea that Prometheus made man out of the leftovers and therefore had to give us fire to make up for our failings. I’m not sure if this version ever made it into an epic poem but it’s a fitting creation story to start my blog.

Fire and hope are connected, just so you know. The way the Greeks told it, Zeus put Prometheus and Epimetheus in charge of creating life on earth. Epimetheus made the animals, giving out bonuses like swiftness and strength and fur and wings. By the time Prometheus made man, all the best qualities had been given out. He settled for making them walk upright, and he gave them fire. Zeus, pissed off, took it away. But Prometheus saw his pride and joy shivering and unable to cook. He lit a torch from the sun and brought it back to man again. To punish Prometheus, Zeus had him chained to a rock, where an eagle fed on his liver. To punish man, Zeus created the first woman – Pandora – and gave her a gift, a box she was forbidden to open. Pandora’s curiosity got the best of her, and one day she opened that box. Out came plagues and misery and mischief. She managed to shut the lid tight before hope escaped. It’s the only weapon we have left to fight the others.

As many of you know, I read a lot of books. My mind goes off on a lot of tangents, especially when there’s interesting history, legends or something just plain weird, and I have to go off and do some research or read more books on the matter. I also like finding coincidences between the books that I read. So this blog is a place for me to record the strange wanderings of my mind.

The majority of the blog will be book related but there might be the odd non sequitur. I shall leave you with a photo of some very curious bookworms… 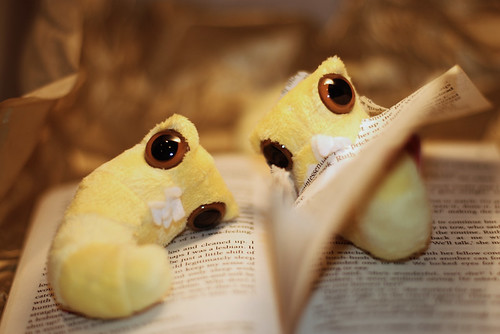 Racing Against The Film Industry

A Wrinkle in Time