Jo Nesbo has been heralded as the next Stieg Larsson, except he’s not Swedish, is very much alive and also proclaims that his writing style just isn’t the same. His crime series is set is Oslo (that’s in Norway) and features down and out detective, Harry Hole. Harry’s described as a Norwegian Bruce Willis in The Redbreast and that is exactly as I picture him now. The books have been translated into English by Don Bartlett and to me they have a decidedly British tone. At a push, I’d liken the writing to that of Peter James. 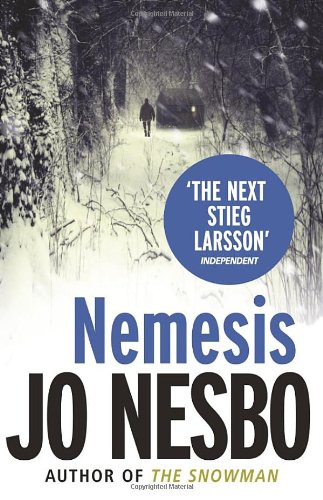 Unfortunately, for those of us that can’t read Norwegian, the first two books in the Harry Hole series have not been translated yet, so you should start with The Redbreast unless you want to wait it out. The translations of The Batman and The Cockroaches are in the pipeline now that sales have shown demand. From what I have read so far, I think they might work as ‘prequels’ answering some of the questions us English-speakers have about Harry’s past.

Unlike its predecessor, Nemesis is mostly told from Harry’s perspective (though not in first person). I don’t think it’s as strong as The Redbreast but I did like the new character of Beate and her transformation from mouse to policewoman. Due to my own lack of familiarity with Norwegian names, I’m still finding it hard to distinguish some of the less central characters. Though this sometimes happens to me with common names when there’s a lot of characters involved anyway. It’s a bit like how I never remember the names of things in IKEA (yes, yes, I know IKEA is Swedish). I was looking forward to a bit more development into some of the storylines started in The Redbreast, but those characters seem to be pushed to the sidelines for a lot of the book. I’m wondering if Anna was featured in a previous book which might make a bit more sense.

When I started the book I thought the title would refer to Harry’s nemesis as featured in The Redbreast. However, early on in the story, Nemesis, Greek goddess of revenge, is brought into play in the presence of a sculptured lamp. I think retribution is a more accurate description of the goddess’ role in mythology, she was the closest thing to justice that the Greek gods had. Mortals were much more likely to be turned into a tree or zapped by lightning if they angered the gods but on occasion they would send Nemesis to dole out justice. I think both the representation of revenge and justice are relevant to this book.

I’m only awarding three shiny stars as I felt the book was a little long and it was only in the final 200 odd pages where I didn’t want to put the book down. In addition, it’s one of those books where the innocent party decides to hide things from the police and you know it’s just the wrong thing to do. I want to shout at them to stop being so stupid! In general a good crime read.