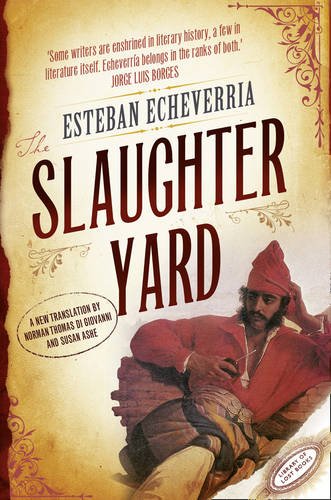 I have learned something this morning. That’s good going for 10:30 on a Saturday morning and it’s all thanks to The Slaughteryard by Esteban Echeverria, or more accurately, The Friday Project’s book that includes this Argentinian classic.

El Matadero is reputed to be one of the most studied texts in Spanish speaking South America. It’s a fairly short story, only 32 pages once translated and details the events of a day at a Matadero, one the public slaughterhouses common in 19th century Argentina. The story paints a vivid picture of the culture at the time and the manic pace within the Matadero as well as having a political aspect.

The real gem of this book is the accompanying appendixes and glossary which really hit home the reality of that political message. I haven’t really had much exposure to Argentinian history and didn’t know much more about the country than gauchos and a passion for football and polo. Like many countries, they have travelled a rocky path to get to where they are now, including a civil war between Unitarians and Federalists and a dictator running the country; Juan Manuel de Rosa. This book can describe the history much more eloquently than me, but the story of The Slaughteryard favours the Unitarians, something that would have got Echeverria into deep water if it had been discovered.

The Accounts by Other Travellers includes passages from various travellers within the country between 1818 and 1863, including Charles Darwin. These accounts all describe the Mataderos from an outsider’s point of view.

I would really recommend it to anyone studying Spanish as a second language as it also contains the original text as well as a selection of poems. How often do you get both in one edition?

A really interesting little book. A big thanks to The Friday Project for sending me a copy to review.

At the time of writing, the Kindle edition is only 99p and it’s more than worth that for the historical aspect alone.

The Fall of the Stone City

A Canticle for Leibowitz

To Kill a Mockingbird