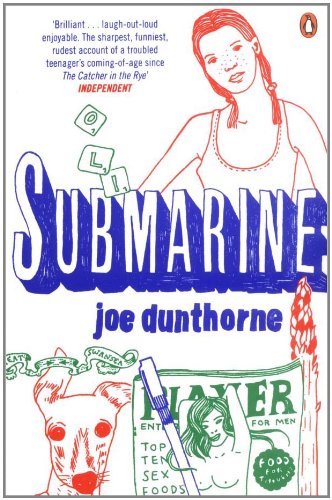 I’ve had this book for years after Joe Dunthorne wrote a version of Hansel and Gretel for a Shoot London event (which we illustrated with photos, not knowing what the story was). Since Submarine has been made into a film now, I bumped it up my list and chose it for my book group read last month.

Oliver is concerned about his parents and is determined to help them rekindle their love. Oh and he also wants to lose his virginity. There’s not a lot to the plot and the structure seemed a bit weak in place but overall an amusing read.

I’m not sure I enjoyed being inside the head of a teenage boy. Catcher in the Rye was mentioned by one of the men that attend (they are rare creatures) and I think it’s in that same vein, a hard one to empathise with without having had those experiences. Several of the group thought that Oliver was a budding psychopath too. There are definitely some disturbing scenes however the mix of diary entries and traditional narrative make it unclear if he was just imagining things.

Despite that, there are some very funny moments and a few things that really stood out as being typical teenage experiences. The part where Oliver gets drunk for the first time was popular with everyone.

I think everyone agreed Joe Dunthorne has potential to be a really good writer with a bit more life experience and most of us would read something else providing it sounded different enough to Submarine.

The Unlikely Pilgrimage of Harold Fry

Considering grabbing a supporting membership to vote on the Hugo's? This might sway you! https://t.co/0VHGmtcaSG