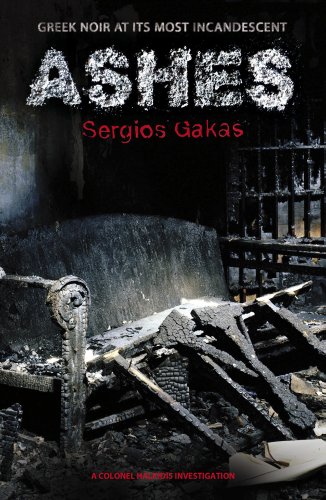 A house in Athens is burned to the ground, three are dead and one women is left fighting for her life. The women, Sonia, was once a great actress and her ex-lovers, her alcoholic landlord and a policeman, are the only ones who wish to find out what really happened the night of the fire.

I liked the idea, the narrative is split between Halkidis and Piertzovanis, the two ex-lovers, interspersed with memories of Sonia. However I found that I was missing the inflections we are used to in speech to know what the character is feeling. There is a point near the start where Halkidis is questioning Piertzovanis about the crime, and it seems fairly genial until the end where it is explained that they were being quite hostile to each other. It really did not come across that way in the wording, perhaps it’s been lost in translation but it happens again throughout the book. Now I know one of the characteristics of the noir sub-genre is a tough guy protagonist but I would still expect some sort of emotional response.

The women came across as much more rounded characters, the prostitute, Rina, that takes a liking to old Piertzovanis and Sonia herself, although she is mostly a memory, I found her interactions with the men charming. Sonia might be a little stereotypical but she was a breath of fresh air as I was struggling to connect to the men.

The resolution of the crime mystery aspect also seemed a bit out of place. The actual culprits didn’t really feature in the story until the reveal and I didn’t find it very plausible. Maybe I’m just not familiar enough with Greek culture.

To be fair to the book, I was left feeling very much the same as I did when I tried to read James Patterson’s Alex Cross series…which is hugely popular and Ashes may well appeal to the same audience.

Ashes was originally written in Greek by Sergios Gakas and has been translated into English by Anne-Marie Stanton-Ife. Currently published in hardback by MacLehose Press. Thanks to Quercus for providing me with a copy to review.