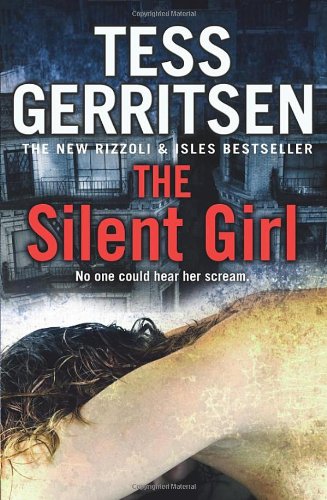 A severed hand discovered in Chinatown leads Rizzoli to a case from nearly twenty years ago. A restaurant shooting where the blame was placed with the chef who then committed suicide. But someone out there believes the chef was innocent and it’s time for the secrets of the past to be uncovered.

The Silent Girl is the 10th book in Tess Gerritsen’s Rizzoli and Isles series. Normally I can plough through one of these books in an evening but I kept putting this one down. There seems to be a lot of redundant material in the first half of the book, some of it does tie together at the end but I didn’t think the drama around Maura testifying against a cop was relevant, except to give her a bit more of a role in this book. However it did pick up in the second half and I enjoyed piecing together the clues.

The tag line for this edition is “No one could hear her scream” which has nothing to do with anything. I don’t think the marketing person who thought that up actually read the book or the synopsis! The title does make sense by the end though.

There was a tendency for an “expert” to go on at length about a bit of evidence. I know this happens in a lot of crime books but it didn’t sit right that the entire team would head across town to find out what animal a hair came from when they could have been informed over the phone. I think this contributed to the lack of pace in general. On the other hand, I did like the inclusion of the Monkey King myth, not long after I’d first encountered it in Kitty’s Big Trouble.

I think it’s worth reading for fans of Gerritsen but I wouldn’t recommend starting off here as it’s not her best.

The Colour of Death

The House of Silk