This is the first of a series, recently translated from the Italian by Joseph Farrell, and takes place during and in the aftermath of a severe winter flood in the Po Valley. The water is rising and a barge leaves the comparative safety of its mooring and is swept downriver until it comes to rest many miles away. There is nobody aboard; the owner, Anteo Tonna, is missing. On the same day his brother, Decimo Tanna, falls from a window in a local hospital, and signs point to murder. Commissario Soneri is set to investigate and soon discovers links with the communists and fascist bands of WW2. The Tonna borthers were fascists, most of the river boatmen were communists, and resentments have simmered for many years. As the flood waters recede and the weather becomes icy, discoveries are made that unravel the mysteries of the past. 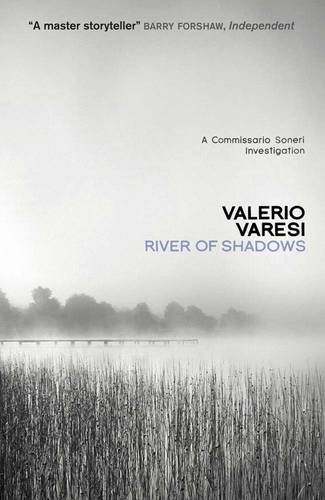 I enjoyed this book and found the Italian justice system, as usual, fascinating. Commissario Soneri goes his own sweet way in his investigation and his mobile phone is rarely switched on, to the deep displeasure of his colleagues. His intuition leads him eventually to the truth but it is a very involved truth, steeped in the atrocities of WW2 which had little to do in this case anyway with the Germans, and diverted to some extent by the crime of people smuggling on the river.

The characters, particularly Soneri, the forensic man Nanetti with his arthritis, and the elderly boatmen and bargemen of the Po, are beautifully drawn and completely convincing; on the other hand, Soneri’s girlfriend, the lawyer Angela, is almost an intrusive character, fond as she is at having sex at or near crime scenes, and it is hard to see at times why Soneri puts up with her, or risks his job for her whims. There is much emphasis on food and drink, lovingly described; Soneri does not stint himself and the hostelries he spends his time in loom as large in the story as the crimes.

It is, basically, rather a dour book. You can feel the wet and the cold and there is a fine sense of place, and the frustration and disappointment of the old men, compounded over the years since the war, comes over very strongly. It is fairly slow-moving at the start, though always interesting, but picks up pace later.

I would award it 4 stars plus. Not quite five but a very good read and the beginning of what looks like a fine series.

You can find Penny over on the ReadItSwapIt forums. Thanks to Penny for reviewing this book for the blog and also to Quercus for providing a copy. River of Shadows is out now in paperback.

On being a gamekeeper turned poacher