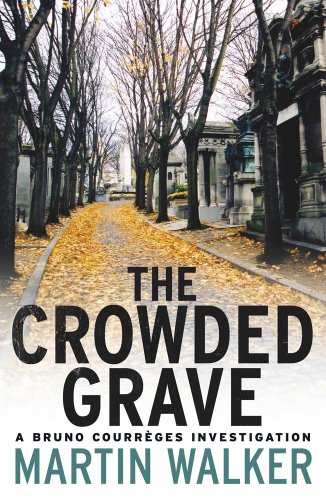 At the site of a ground-breaking archaeological find, a more recent burial is discovered. With an important summit being held in the region, authorities are on the look-out for Basque separatists all the while trying to protect the local foie gras farms from animal activist attacks.

You would think that either Basque separatists or archaeology would provide a fascinating vehicle for a crime novel. However even the dead body takes a back-seat to the foie gras industry. The first 60 odd pages are practically an advertisement for something a lot of non-French people disagree with. Now I’m happy to be re-educated and am aware of ethical foie gras production outside of France but the author has a bit of a well-meaning slip-up when trying to defend it. I quote “the force-feeding of the birds, was also a natural process”.

The word “force” in itself implies the process is not natural. The fatty liver condition that gives us foie gras does indeed occur in the wild when certain species of ducks and geese fatten themselves up for winter. A visit to a local duck pond will demonstrate the birds’ fondness for food that isn’t healthy for them and I’m sure these foie gras farms could invite local children armed with bags of stale bread on a daily basis and get the same effect as sticking a funnel down the birds’ necks.

This disagreement wouldn’t have been so much of the issue if Bruno had spent more time investigating that dead body or securing the town for the impending summit. He’s only a local policeman, employed by the mayor rather than the gendarme who are the military police of France, so I can understand his job isn’t to run murder investigations. If he hadn’t have spent so much time eating foie gras that he shouldn’t have been able to afford, I might have felt it was part of his job. Instead it came across as indulgent preaching.

Read if you like foie gras or don’t mind that being the premise for the story. It’s an easy read and I wanted to like Bruno but I just felt a bit let down. I did quite like his dog, Gigi the basset hound.

This is the fourth novel in the Bruno, Chief of Police series by journalist and foodie, Martin Walker.

The Crowded Grave is currently available in hardback and ebook formats. Thanks go to Quercus for sending me a copy to review. You can find out more about Bruno and the food of the region at his website.

This is Not Forgiveness

In Praise of Savagery