C.W. Gortner is the author of six historical fiction novels, the latest of which is The Queen’s Vow, published this month in paperback by Hodder & Stoughton. The novel follows the life of young Isabella as she becomes one of history’s most powerful and controversial queens. Christopher has kindly taken the time to answer some of my questions about the book and historical fiction. 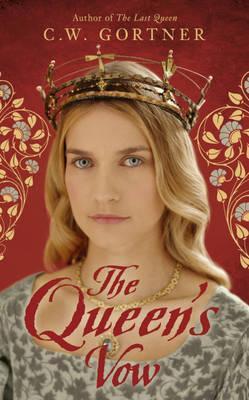 What draws you to historical fiction?

I grew up in Spain, surrounded by remnants of history. There was an old castle close to my house where I used to play as a child; it had been a summer residence of Isabella’s and has since been fully restored, but in my childhood it was in ruins and I used to clamber about it, imagining how it had been long ago, in her day, with knights on horses and pennants streaming from the ramparts. History was a living entity to me, not a mere recollection of names and facts we often find in school books. I was also fortunate to have a teacher who recognized my youthful fascination with history and encouraged it; she introduced me to historical novels by Anya Seton, Alexander Dumas, and Jean Plaidy, among others. I immediately fell in love. Here were the stories I envisioned, filled with emotional, flesh-and-blood people. The past brought to life through words exerted a powerful influence over me that has never abated.

What was it about Isabella that made you want to write about her?

Well, of course I grew up hearing her name in Spain and studied her in school. But, as with most learned history, to me she was one-dimensional and rather frightening: the fanatical warrior-queen who kicked out the Moors and the Jews, and started the Inquisition. However, I studied her in depth when I researched my first novel, “The Last Queen” about her daughter, Juana. Isabella is a strong character in that book; we meet her after her triumphs, as she launches her newly-forged nation through the marriages of her children to various world powers. That research led me to discover this rarely-told, fascinating story of Isabella’s tumultuous youth and struggle to win her throne. She did not start out, I found, as the somber matron of her later years. Like all of us, she had once been young, ambitious, determined. She had nothing to commend her save her royal birth; no one expected her to become a queen and yet she defied the odds in an age when few women ruled successfully. The story of Isabella’s youth and early reign is exciting, passionate; steeped in tragedy and triumph. I knew while writing my first novel that I had to build a future novel around Isabella, and so it came to pass. It brought me full circle too, as “The Last Queen” begins where “The Queen’s Vow” ends.

How do you go about researching your novels?

I start out with reading everything I can find about the era. Biographies, books about the period, its politics, architecture, music, costume— in short, everything that can help shape the world which my characters inhabit. I also rely on extant contemporary documentation, such as ambassadorial dispatches, eye-witness accounts, and, whenever possible, letters. No detail is too small; I’ve been known to hunt down a costume expert to help me figure out how shoes would have been laced. Not all my research actually makes it into the final manuscript, of course: as a historical novelist, the idea is to wear the research lightly. But it’s important to me to feel grounded in the era I am exploring, to know things like, how did a cloak clasp; how heavy would a silver wine ewer be; how does it feel to dance or ride in a period gown. I also travel extensively. Though the landscapes and places have often changed drastically in the hundreds of years since my characters were alive, I have discovered there is nothing quite like setting foot in the castle where Isabella struggled to assert herself against her half-brother; seeing the plain where she berated Fernando for failing to win a war; walking the gardens in Seville where she retreated, troubled and doubtful. Places carry echoes of the past and this is what I strive to “hear”, the vanished world under the modern one. It helps immeasurably as well in terms of sensory information; for example, I had no idea how distinct, and unique, the smell of bitter orange is in Seville on a summer evening. Isabella would have smelled it, and a detail like that can give a book real life.

How do you balance the need for historical accuracy with creating a personal side to your characters?

It’s always quite a fine line to walk. I do my utmost to not deliberately distort what is known about my character, though that in and of itself can be open to interpretation, depending on who is relaying the information. For example, a Portuguese ambassador might write an account of Isabella that will be quite different from, say, an English one. So, as a novelist I tend to weigh the information on invisible scales: if enough of my research supports the fact that, say, Isabella was very pious, then this is an aspect of her personality that I must work with. I can’t turn around and make her a frivolous, carefree queen if nothing in the evidence indicates it, much as I might personally balk at working with a woman who believed in a vengeful God who watched over her. However, human beings are complex and no historical account, however accurate, can convey all the nuances we carry within our personalities. I often seek those nuances between known facts in order to construct my interpretation of a character; for example, my research turned up a cache of letters that went between Isabella and her council where she’s arguing against the implementation of a papal edict of authorization that allowed her to establish the Inquisition. This supported the documented evidence that regardless of her personal piety, she in fact did delay establishing the Inquisition for several years, though she had the means to do so. Why did she delay? There is no explanation that she herself has left to us. But, based on what I did know about her careful approach to decision-making, her consummate belief in the welfare of her people, coupled with her Catholicism, I believe she may have delayed because she doubted whether persecution would achieve her goal, at least at first. Doubt is a powerful counter-balance to fanaticism. Thus, I was able to create a God-fearing queen who nonetheless secretly doubts whether God truly intends for her to act as her councilors advise her.

Do you think fiction is a good starting point to learn history?

I think it’s an excellent starting point: it’s how I became more interested in history itself, through reading fiction. That said, it’s also important to always remember that historical fiction is a recreation of the past as seen through the eyes of a novelist. Fiction can return the color and scent and touch to the past; it can give us the panoply of human emotion and resurrect, if you will, the drama of those long gone. However, as none of us were alive at the time and we have not had the opportunity to converse with these people, it remains in the end an interpretation based on fact, and not more. I take some onus with those who disparage historical fiction as an inferior genre; a historical novel can spark the imagination of a reader and encourage him or her to explore history further, beyond the end of the novel. It is not essential, however, that such further exploration be required in order for an historical novel to succeed, any more than it is required of other genres in fiction.

If you could travel back in time, which period would you most like to visit?

I often stumble over this question, simply because I am truly a man of the 21st century in many respects. The lack of adequate sanitation and the medicinal challenges alone of the past would be hard on me, not to mention the rather unsavory aspects of the judicial system, serfdom, the treatment of animals, etc. However, if I could step on and off my time machine at will, I think I would like to visit Renaissance Italy at the height of its glory, when Leonardo da Vinci was painting in Florence and the passion for the classical arts, rediscovered and reinterpreted by a new age, ruled the city for a short, glorious time.

What do you do when you’re not writing?

I love to read, of course; novels remain my primary form of entertainment. I like film, too, and to travel and be in nature. Nature restores perspective and balance in my life; when I’m hiking in the mountains or swimming in the ocean, I’m reminded of how often I tend to fret over the inconsequential in life, forgetting that we are all here a brief time. It also reminds me that we are part of a vast, interconnected tapestry, mere fragments of a whole; and we must do all we can to preserve this beautiful planet we call home. Animal rescue and conservation are causes dear to me, as well, which I dedicate time to.

I don’t spend much time online, not sure if that’s a good or bad thing. I’m usually on a deadline and therefore focused on my book, except for downtime on social media, like Facebook. I do often engage with the Angels for Animals network on Facebook, if anyone is interested.

Thank you so much for spending this time with me. I sincerely hope your readers enjoy THE QUEEN’S VOW. To learn more about me and my work, please visit: www.cwgortner.com

Win The Book of You!

If you liked this novel, try this non-fiction!

How to experience a good blog tour