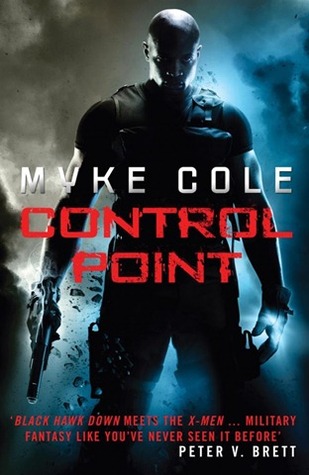 The human race is evolving. Across the world, super powers are manifesting in ordinary people. But the US government has deemed many of these powers to be illegal. Lieutenant Oscar Britton is a loyal army man, even working alongside the Supernatural Operations Corps to police the new law. Selfers, those who choose to run, must not be allowed to live. When SOC murder a teenage girl after she had been subdued, Britton starts to doubt his duty. Then the unexpected happens; he manifests a rare and prohibited power. He can either run or choose to die.

This might seem a bit out of my comfort zone, and you’d be right, but I was intrigued by the idea of a supernatural military. It jumps straight into the action at the beginning and whilst there is a glossary provided at the back, I found all the military jargon went over my head and found the action hard to follow. If I were ever in a real combat situation, I’d be all “What? I don’t understand!” just before getting shot. I am willing to concede that action-based books aren’t really my thing but Control Point shifts its focus about a third of the way through.

The probes (that’s people with prohibited magic powers) are sent off to a magical military school. So we know one character is definitely a teenager, but does that explain why all the recruits sound like them? Including Oscar, who was definitely introduced as a full-grown man. He suddenly seems to be acting like a sullen boy. I could have easily lifted out a section and presented it as young adult. The whole situation is classic YA dystopian; kids ruled under an iron fist by unfair and prejudiced leaders (that would be the military officers). But I really don’t think they are meant to be kids. And Oscar repeatedly saying “She’s just a kid” gets rather annoying.

So, you’re probably wondering why I carried on reading. Around half way, it starts to settle into some common ground between military and magic school and a goal is introduced. Finally, something to aim for! Plus there are several interesting minor characters. The passages with Marty the goblin healer were the best bits and I’d seriously read a spin-off series about him and his fellow goblins. Scylla, locked away in her box, also piqued my interest although she never panned out to be a complicated enough character for my taste. Indeed, many of the characters are a bit obvious.

Each chapter is headed by a faux quote from a person of authority, official document or the media. These are actually pretty good and shouldn’t be skipped over (unless you’re all about the action). They form a sort of oral history of the world post “re-awakening”, which in turn makes up for the lack of world-building within the main text. There are some valid points in there and I’d liked to have more of a political slant. If you strip away the magical elements, it doesn’t paint a rosy picture of how the military can handle things. I got to the end not really understanding why they were at war and with who, something that unfortunately happens in the real world.

I am calling Oscar Britton by his first name as that’s more natural for me, but most the time he is referred to as Britton. I’m pretty sure this is a military thing and the formality around a lot of the characters is a bit hard to get past. Maybe that’s why Marty and Scylla appealed. Also some of the characters are referred to as their power, eg. the hydromancer, instead of their names. I found this very confusing, especially as a lot of the powers had been glossed over.

I wouldn’t run to read Fortress Frontier straight away, but there was enough of an improvement in the second half that I would consider picking it up in the future. Control Point is published by Headline in paperback and ebook formats. Thanks go to the publisher for providing a copy for review.

How to enjoy a British summer… a weekly check-in https://t.co/nCkgU5JmVf

Spent the afternoon playing a demo of @Timberborn - a lumberpunk Beaver city-building game! Will definitely be buyi… https://t.co/nCucaDXrIz

I just spied that The Rookery is only 99p on ebook at the moment! Here's my review https://t.co/cFtthv7ORJ

I just noticed Audible Plus in the app. Thought I'd accidentally singed up for something but I see now you get a se… https://t.co/21Z9dF1Te2