Devil’s Due is the sequel to Devil’s Bargain and therefore this review may contain spoilers for the previous book. 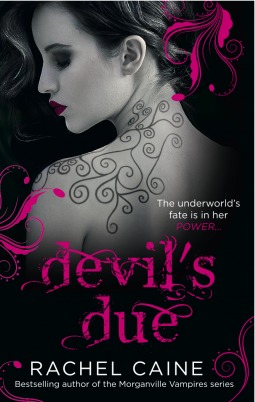 Ben McCarthy is getting out of prison and Lucia Garza is there to welcome him…and offer him a job. The private investigation firm she and her partner Jazz started is doing well, and it’s been a while since they received a red envelope. Until, one arrives containing white powder sending the office into lockdown and two of team exposed to who knows what. Whilst they try and work out what the Cross Society is playing at or if it’s their enemies at work, an abused woman turns up seeking protection from her husband.

Devil’s Due follows Lucia instead of Jazz and is full of fast-paced twists and turns. Maybe too many turns… It would be hard to summarise the plot other than it is full of conspiracies, bluffs and back-stabbing, not to be unexpected when dealing with two secret-squirrel organisations, both of which seem up to no-good at the same time as doing benevolent deeds.

Let’s rewind a minute. In Devil’s Bargain Jazz and Lucia got embroiled in the Cross Society; given funding to run their business providing they follow the instructions in the red envelopes. Sometimes all they need to do is sit around in a car park whilst something happens, for they are important figures that have the ability to change the course of events. The Cross Society uses psychics to predict the future and what they need to do to channel the pattern of events to their end goal.

Lucia and Jazz have come to the conclusion that they won’t run when they are called and they won’t stand by when innocent people are being killed, not if they can do something about it. So obviously, they are pissing off the people in charge. There’s so many characters running around with different agendas, it got a bit confusing at times, but still fun when I stopped trying to think so hard.

Lucia is immediately attracted to Ben and I found the story veering off into rather obvious flirting segments repeatedly. But never fear, the next moment someone would be trying to kill them. The most hilarious thing is, everyone can guess that the envelope contained anthrax and Lucia is displaying cold-like symptoms, yet she’s still inclined to make-out in the doorway. I think Pansy has the right idea, hanging around in Manny’s fortress watching DVDs in her PJs.

If you enjoyed Devil’s Bargain then I’d recommend Devil’s Due as it does shed a little more light on the mysterious goings on of the organisations as well as providing some more character development. There is no way this book would work as a standalone novel, despite the handy case file provided at the start.

Devil’s Due has recently been published in the UK by MIRA and is available in paperback and ebook formats. Thanks go to the publisher for providing a copy for review via NetGalley.

A Tale for the Time Being

The Coldest Girl in Coldtown

What I’ve been reading… a sort of weekly check-in

The building where we don't go into work any more is introducing beer fridges to tempt people back.