A is for… Atlas

Ellie, 10 years ago 4
Atlas, who bore the weight of the heavens on his shoulders, was a Titan who pops up in the tales of the hero, Hercules (or Heracles depending on your language preference). The basic background of the Titans is covered pretty well in the Percy Jackson books, although they are quite biased to the Olympians’ views. The winners always write history don’t they, so the same can be said for mythology. Just in case you aren’t familiar with them, the Titans were a race of super strong giants that ruled the earth before the Olympians (not atheletes, but what we more commonly know as the Greek gods). 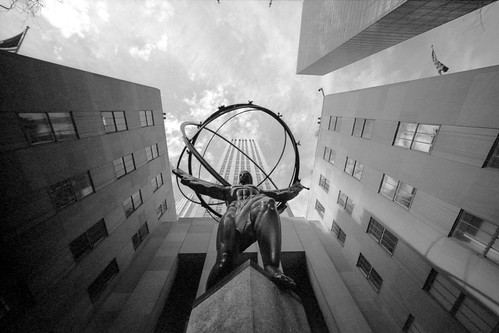 Photo by Jeff Berman
As the film, Clash of the Titans, suggests, there was a war between the Titans and the Olympians and the victorious gods weren’t that kind to their prisoners of war. Many of them were thrown into the pit of Tartarus, however Zeus decided to punish the strong Atlas by forcing him the bear the weight of the celestial sphere (otherwise known as the heavens, the sky or, more recently, the atmosphere) on his shoulders.

Percy Jackson and the Titan’s Curse is fairly faithful to the myth, with various characters having to bear the oppressive weight of the sky after Atlas escapes.
One of the Twelve Labours of Hercules was to take apples from the Garden of Hesperides but for whatever reason (there are a few versions), this was not something he was capable of doing himself. Being one of the few people strong enough to bear Atlas’s burden, he offered to take the weight off the Titan’s shoulders in exchange for getting the apples. Fearing that he was going to leave him carrying the sky forever, Hercules then tricks Atlas into taking the sky back under the impression he was adjusting his clothing.

The story of Atlas and Hercules is retold in Jeanette Winterson’s Weight. Whilst the Percy Jackson books portray all Titans as evil, I felt sympathetic to Winterson’s Atlas and thought Hercules a scheming git. There’s a moment where Atlas is watching mankind attempt to conquer space and they launch the first dog into orbit. When he sees what they plan for the dog, Atlas scoops Laika up and keeps him as a pet. It’s an oddly moving moment and a book I wholly recommend.
Many people assume that an atlas of maps is named after the Titan however this is not the case. According to legend, Mauretanian King Atlas created the first celestial globe and inspired the name. The confusion has caused many a depiction of Atlas to show him holding up a globe rather than the sky. Certainly the myth of Atlas is the source of the saying “to bear the weight of the world on your shoulders”.
Random fact: the first vertebra of the spine (C1) is named atlas as it supports our heads as Atlas supported the sky.

Have you read any other books featuring Atlas? I would love to hear about them.

Kick-starting my imagination: the adrenalin of inspiration

Left on the Shelf

The City of Brass

Witches, demons and a missing piece… a weekly check-in

Forgot how hard fishing is at the start of Stardew Valley. At least they've added a training rod so I have some cha… https://t.co/3lOs92nZRm

Today's #bookpost , my pre-order of A History of What Comes Next and a review copy of For the Wolf from @orbitbooks https://t.co/CW9NjJZTbT

February's nearly over, what new releases made it onto your shelves? https://t.co/PKFbhgReUe

Today he would become a god. His mother had told him so. The opening line may seem like something any mother would tell her son, but in the case of Serapio, his mother truly believes he will become the Crow God reborn. She blinds him,…

The day Bree gets accepted into an early college placement at UNC, is the day her mother dies. The last words they spoke were of anger. Unable to deal with her dad’s grief on top of her own, Bree goes ahead with the placement. Once…

Alex Stern does not belong at Yale. When she awakes as the sole survivor of a multiple homicide, presumed a drug deal gone wrong, she is given an unlikely offer. Come to Yale, join the House of Lethe and oversee the rituals of the other…

Just let me dust off this blog thing, I have a review for you! One of my anticipated reads released during lockdown was the follow-up to An Absolutely Remarkable Thing. If you read that, of course will will be dying to know what happened to…