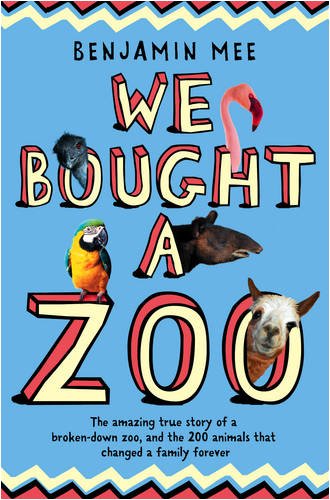 I read We Bought a Zoo a few years ago in my pre-blog days and it’s remained one of my favourite non-fiction reads. It’s the story behind Dartmoor Zoo but more than that it’s the story of a man without a zoological background who one day decided to buy a decrepit zoo with his family. It’s the kind of thing you might daydream about doing if you ever won the lottery. But Benjamin Mee wasn’t a lottery winner and there’s financial struggle as well as personal tragedy.

As I’ve been following the making of the film version on Twitter from the start, I’m not sure how it didn’t register that the film was all very American. I watched the trailer this week…We’re not on Dartmoor any more Toto! Understandably they’ve moved around some of the events and it looks like Ben buys the zoo as an addition to a house, rather than falling in love with the idea of owning a zoo and getting a nice house in the bargain.

I suppose one of the reasons I loved the book because it’s the kind of story that you would think was a little far-fetched if it were fiction. There’s a leopard Houdini, reminders that there could be something on the other side of the fence reminiscent of Jurassic Park (for those of you that don’t know, there’s a good chance Dartmoor is home to escaped big cats) and, honestly, who wouldn’t be charmed at the idea of owning a zoo? Ben didn’t get much chance to make things up either as he was followed by a documentary crew for much of the early days. You can still see repeats of Ben’s Zoo on Animal Planet every now and then.

Of course, the reality of running a zoo isn’t a smooth path. In the UK, at least, owning exotic animals is highly regulated, not only for the animals’ happiness but also for the safety of the people around them. As well as being entertaining, the book is a realistic taste of what working in a zoo entails, something I doubt the film will get across in the same way.

So with the impending film release, there’s bound to be a film tie-in cover. I don’t like these at the best of times but for a non-fiction book it seems a bit misleading. I’m hoping the UK version at least has animals on it and not the grinning photo of Matt Damon that the US market have been lumbered with. As Dartmoor Zoo pointed out on Twitter, it’s much better marketing to have a film tie-in and I guess if it gets people reading it can’t all be bad. Never fear, there’s still time to get the charming, slightly amateurish looking paperback edition as the film’s UK release is 16th March 2012 and a reliable source tells me there are still plenty of copies at the zoo.

One bit of design I do like is the cover art for the soundtrack:

For more information on visiting the zoo, photos and some unique gift ideas (currently on BOGOF too) visit Dartmoor Zoological Park.

How to Survive a Horror Film