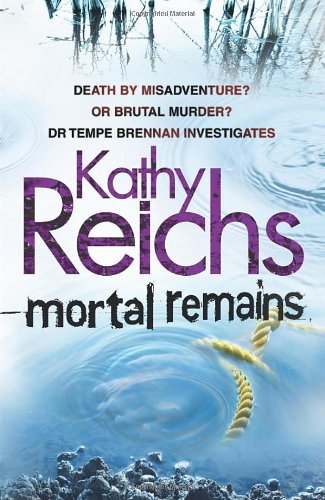 Mortal Remains is the UK title for Spider Bones and is the thirteenth book in Kathy Reichs’ Temperance Brennan series. The book covers an area which is the staple work of most forensic anthropologists, identifying vitcims of conflicts. In this case, Tempe is called in to solve the case of some misidentified remains from Vietnam and travels to Hawaii to sort it all out.

Whilst it’s refreshing that the subject matter is convincing, it doesn’t make for a particularly gripping novel. I could have easily have put the book down and forgotten about it. No one was in imminent danger, at least not until near the end where the threads of plot connect and become somewhat convoluted.

I really didn’t see much point in the whole Lily and Katy relationship. It was annoying and didn’t have much relevance to the plot. I think Kathy wanted to get Ryan in the story somehow and this was her solution. I’m not sure why he couldn’t just have appeared by himself on holiday, that would have made more sense.

At one point Ryan asks “Do tiger sharks really deserve the nasty Hollywood image?” and the expert replies “Ooooh, yeah”. Anyone that has a passing interest in natural history documentaries will be able to correct her. Yes, there are shark attacks, but a man-eating shark is very rare. Mostly they mistake humans for tasty, blubbery seals and after one bite, they don’t come back for more. I quite like sharks and don’t like it when people make out that they’re evil, killing machines. They are at the height of evolution for a predator, yet they are not outright cruel like orcas and dolphins can be. I know this isn’t the point of the book and it’s a small part but it made me go grrr!

I fear Tempe and I have come to an end. The previous two books didn’t impress me much and Mortal Remains hasn’t improved matters.

The UK paperback release is 7th July 2011 and I think they may be using the original title, just to confuse people even more.

Back in the Swapping Saddle

When God Was a Rabbit

Before I Go To Sleep