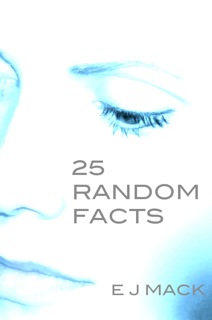 Ellie, 10 years ago 0
The following is an extract from 25 Random Facts by E.J. Mack…

It wasn’t long before she finally saw it appear, glorious and bird-like over the canopy, majestically rising above the trees before skimming effortlessly over the forest roof as it flew directly towards the clearing and her hiding place. Despite everything that had happened she found she still felt that familiar thrill of excitement knowing that he was close.

As the helicopter finally cleared the trees and began to descend towards the grass a wild wind blasted her face, forcing any loose strands of hair upwards so that they lashed at her temples. As huge clouds of dust swirled up in the clearing before her she took this as her cue to emerge, striding purposefully out from the shadows, her right hand raised to shield her eyes from the grit that was being forced up from the ground in tempestuous flurries. She felt sure she had seen such a scene in the movies however they never played out like that which was about to unfurl before her.

Wiping the hair strands away from her face, she felt her heart thundering in her chest as she watched the careful decent of the ‘candy-apple’ red helicopter. A red she herself had chosen the day they had put down the deposit, declaring it their ‘escape pod’, and with the memory came a resurrection of the tumult inside her that had been threatening to spill out for some months now. She rehearsed confrontational lines in her head for what seemed like the millionth time as she watched the slow descent and how the underbelly seemed to sway from side to side on its way down as if in some kind of ceremonial dance towards the floor.

But events took an alarmingly different turn to those she had played out in her head. Instead of settling onto the long, dry grass as she had expected, the helicopter began to lift up again momentarily before veering over to the right. She realised at that second that having seen her they were now trying to escape. In her ensuing panic and fury, she bolted out, right away from the tree line, waving frantically at them, screaming at the top of her lungs, anything to make them come back down and face her. This was her moment to regain control and it was slipping out of her reach with every second that passed. She was furious at herself for how stupid she had been not to wait until they had actually landed before approaching them but she had never for once thought they might try to evade her. Beaten at the last hurdle, she watched impotently, dumbfounded as the helicopter skated across the clearing, and then froze as she realised the rotor blades were far too close to the edge of the clearing.

It seemed to be drifting now, unable to ascend quickly enough to clear the treetops, instead being dragged as if by a magnet towards the foliage and into highly hazardous territory. What was Matt doing? In her sudden panic she began to scream again, but this time in horror as she watched first the blades, and then the legs of the helicopter catch in the trees. In trying to clear the forest, Matt had lurched violently to the left but it was far too late, he had lost all control. And so they began to dive down, the machine spinning around and around until finally it hit the ground with all the force imaginable. The landing legs crumpled on impact, flipping the helicopter over onto its side, rotor blades snapping into pieces, sending debris flying up into the air as thick grey smoke plumed upwards into the sky.

She ran as fast as she could, choking on the acrid smoke, oblivious to her own safety, desperate to find Matt and drag him clear but her eyes were smarting so badly she could hardly see. There was smoke everywhere. Scrabbling around blind, she stumbled over something and discovered it was a leg, a man’s leg. She immediately snatched at the ankle and heaved with all her might, dragging Matt away from the smouldering wreckage and over to the other side of the clearing where the air was clear.

“Sophia. Sophia,” he mumbled in his confusion. His breathing was laboured, his eyes unseeing and terrified. He kept trying to move back to the wreckage and she had to use all her strength to keep him still.

“It’s OK my darling. It’s all going to be OK,” she murmured reassuringly, stroking the sweat-dampened hair from his face.

But it was not going to be OK. Pawing at his head she was surprised at just how wet it felt until she removed her hand from the back of his skull. It was crimson with his blood. As she gazed down at the only man she had ever loved, tears spilling out onto her now charcoaled cheeks, she felt his body go limp in her arms, saw his eyes lose all attempt to focus and then he was still. There was a sudden screaming, an animalistic howl which eventually she recognised as her own.

“NO NO NO NO!” she tried to shout, but the words were trapped in her throat, and came out as a hoarse rasp.

She buried her face against his, her hair falling like a funereal curtain over them both, hiding them from the horrific reality of the disaster, and there she would have stayed for eternity were it not for the realisation that flames were now beginning to engulf the helicopter and there was someone else still on board. Placing his now dead-weight body as gently as she could amongst the grasses, she rushed back to the wreckage just as the first scarlet and orange flames were beginning to take hold. She knew she had only seconds before a fireball would engulf them both.

If you’d like to read more, 25 Random Facts is available in ebook format from the following retailers (Sony and iBooks pending):