Notes from a Small Island

I will start out by saying that I do enjoy Bill Bryson’s writing in general and my criticisms of Notes from a Small Island would not put me off reading his books. Written in 1995 it is now a little bit dated, especially as part of the premise is that he’s revisiting places from his past and seeing what’s changed. Whilst there are thing that are the same, there’s an awful lot that isn’t.

Bryson is obviously rather fond of Britain and there are a lot of really quite charming things he picks up on. Yes we do tend to say sorry when someone else walks into us, we are forever enthusiastic when presented with hot tea and biscuits and we do talk about the weather. We’re probably both a bit more cosmopolitan and more proud of British things. There are so many more restaurants, markets and shops peddling quality local produce now and more people appreciate a “holiday at home”.

Having spent some time working at the Bournemouth Echo, Bryson understandable covers this area and there’s a large portion of the book dedicated to places near where I live now. It was a bit like a collection of Ellie’s Days Out but I did enjoy comparing his experiences to mine. There is still a portacabin on the edge of the Kimmeridge carpark but there’s been a few additions to the bay since including a small marine conservation centre and tea rooms (which I’m sure he would have appreciated). 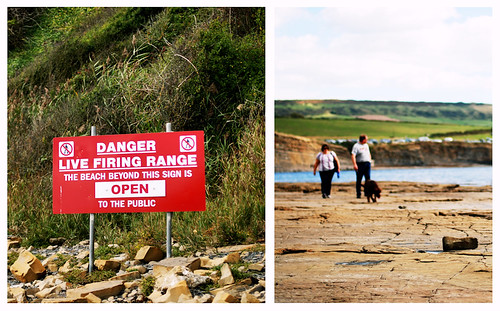 
He harps on a bit too much about how we’re ruining the architectural integrity of towns. I think he would have us all living in picture postcards where in reality, we need commerce and affordable housing. I personally like the fact that you have to look closely to see the Victorian adornments on buildings around Bournemouth, it’s like a special little treat for those that appreciate it. There are very few towns or cities in this world where every building looks attractive and just because we have centuries of history around us, doesn’t make us any different. I’m sure some people thought Victorian embellishment was garish at the time too.

A detail of a Victorian building above a car parts shop in Bournemouth.

I read this as one of my “Books I Should Have Read By Now” (just squeezing in there as a voracious reader in June) and it was probably a book I would have enjoyed if read ten years ago. I did pick up Bryson’s latest, At Home, this week and will look forward to reading that in a timely manner!

Like Loading...
Tags #4 stars #bill bryson #books i should have read by now #notes from a small island #photo #Travel
5 Star, Translation

You Will Not Have My Hate

What the Dog Knows