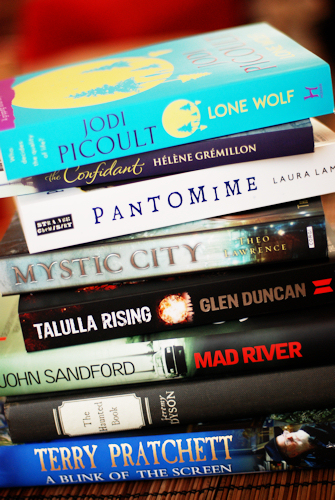 During my readathon internet break, I managed to get riled up on Twitter by someone who was criticising posts like this (Showcase Sunday, IMM, etc.); saying that they are bragging, pointless and unprofessional. Now, do what you like with your own blog, but just because people do things differently does not make them unworthy.

It’s not like we’re only talking about review copies. Most of us buy and borrow books, some we win or are gifted to us and, yes, some are for review. I think publicists appreciate any mention of the books they send out and indeed I have gone and bought books off the back of these sort of posts. I don’t think it ruins our blogs by telling people we got some books this week or that mentioning review copies is bragging. To be honest, there are advertising laws in place that make it a grey area not to reveal the source.

One of the benefits of the blogging platform is that it doesn’t need to be sterile and conform to a set of rules. I’d much rather see someone’s enthusiasm shine through than read impersonal critiques, yet I accept that some people want to do that and read those sort of blogs so I have no animosity towards them. And I would never make rude assumptions and then try and convince the wronged party they shouldn’t have their feelings hurt by the comments. They’re my feelings, however pointless they are, they matter to me.

Onto the books! I was so excited to receive a copy of Pantomime and if you’ve been paying attention to my readathon wittering, you will know I’ve read it already and loved it! We are all sworn to secrecy about the secret in the book so it’s going to be a tough one to review considering the things I want to talk about. The Confidant was also on my readathon pile and my review should be up as part of a blog tour at the end of the month.

I also received some surprises in the post this week including a Halloween package from Canongate. I’m not sure if I will read Talulla Rising as I can’t forget the author’s negative comments about genre readers. I do like the sound of The Haunted Book though and will try and fit it in before Halloween. Mad River sounds a little Criminal Minds-esque so will be added to the ever growing pile of crime fiction I must get round to reading soon.

Now, I may be losing it but I have no recollection of pre-ordering Mystic City. I thought it sounded interesting at first but have since heard a lot of people saying it’s not that good. Though I’m often contrary to the greater YA reviewing community so at least I’m starting with low expectations. The Terry Pratchett book is a short story collection and Lone Wolf was one of this week’s £2.99 books in Tesco.