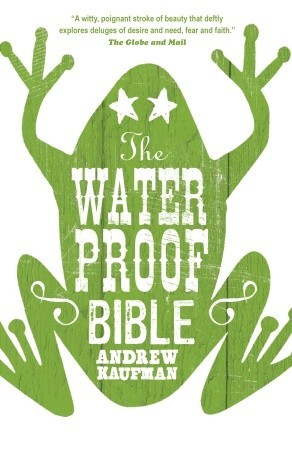 Why do bad things happen to good people? Because it makes a good story.

Aberystwyth is searching for her estranged mother who was banished from her underwater parish when she pointed out to her parishioners that their religion is all lies. Just stories, and that living on dry land isn’t a sin; that having the ability to exist both underwater and in air is a blessing. The rust is about to set in and Aby still believes that if her mother dies with air in her lungs, her soul will never find peace.

I really benefited from this being a book group choice. Whilst I enjoy Andrew Kaufman’s style, I felt the stories were a bit disjointed and I got to the end not feeling I’d missed the point. So during the discussion, when someone mentioned it was all about grief, it all clicked into place in my head. He somehow manages to convey very real issues in an unreal way.

Rebecca compartmentalises her feelings into boxes. Actual, physical boxes which she keeps in a storage unit. When an emotion is too much for her, she boxes up something related and it dampens them. Her actions throughout the book cause her to lose herself because our past emotional responses are part of what makes us, us.

Lewis, mourning the death of his young wife, does a runner. Just gets on planes so that he is physically away from his grief. He’s staying in a hotel run by a slightly green woman (who technically is squatting) and there are rainmakers in town. Then he meets a woman who claims to be God.

Aby was also skeptical of Pabbi’s advice that she would be able to steal a car by looking for its keys in the wheel well. She did not doubt the existence of cars, or of wheel wells, but the idea that anyone would be so cavalier with their keys seemed ludicrous. Devoted Aquatics, which Aby certainly was, believe that losing your keys not only predicts, but elicits mental illness. To lose one’s keys is the equivalent of losing one’s mind.

I loved Aby. She emerges from the water and steals a white Honda. She has never driven before but she had been given some basic tips for what she had to do on dry land. Including stealing cars. Her driving is hilarious. She’ll be on the wrong side of the road and just close her eyes, it’s amazing that she doesn’t get killed. And yes, she is an amphibious being but I think it helps to use a made up culture to question religion as it stops people getting offended.

I was really quite surprised that most of my book group enjoyed The Waterproof Bible. It’s not our usual fare and I don’t think it’s Kaufman’s best. But only 3 people disliked it and wouldn’t read anything by him again. It’s full of his usual quirky style and worth a read if you’re already a fan but there is a lot going on for such a short novel.

We Cast a Shadow