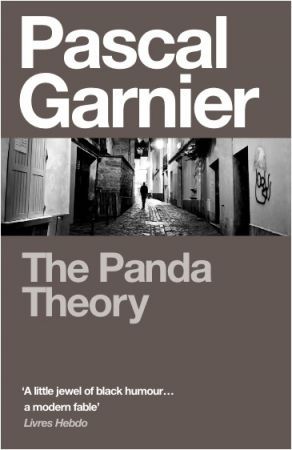 When Gabriel steps off the train in a small Breton town, he is a complete stranger. Nobody knows where he came from or who he really is. Yet his small acts of kindness make an impression on the locals and he is soon welcomed into their community. But Gabriel may not be as straight forward as he seems, for he is troubled by his past.

The Panda Theory is a charming little French novella which might just err on the side of being a thriller. The publishers may categorise Garnier’s books as “noir” but I found the characters much more engaging than I would normally in noir fiction. Gabriel is a friendly man and the majority of the book shows how he touches the lives of several people in small but meaningful ways. All the characters seem real and remain feeling French throughout the translation. Gabriel’s past troubles are revealed in short flashbacks, slowly building up a picture of what he was running from.

The panda in question is a large stuffed toy Gabriel wins from the fair. He didn’t really want it but it seems to hang around. The panda welcomes everyone with open arms and a cheery demeanour. Is Gabriel like the panda? I’m not telling, although I really didn’t see the ending coming.

Pascal Garnier sadly died in 2010 but left behind what seems to be a large body of work, long and short, for adults and children. Gallic Books has started translating his work into English with three novellas; The Panda Theory, Where’s the Pain? and The A26. I’m looking forward to reading more of his work.

The Fall of the Stone City

The City of Brass

Witches, demons and a missing piece… a weekly check-in

Forgot how hard fishing is at the start of Stardew Valley. At least they've added a training rod so I have some cha… https://t.co/3lOs92nZRm

Today's #bookpost , my pre-order of A History of What Comes Next and a review copy of For the Wolf from @orbitbooks https://t.co/CW9NjJZTbT

February's nearly over, what new releases made it onto your shelves? https://t.co/PKFbhgReUe

Today he would become a god. His mother had told him so. The opening line may seem like something any mother would tell her son, but in the case of Serapio, his mother truly believes he will become the Crow God reborn. She blinds him,…

The day Bree gets accepted into an early college placement at UNC, is the day her mother dies. The last words they spoke were of anger. Unable to deal with her dad’s grief on top of her own, Bree goes ahead with the placement. Once…

Alex Stern does not belong at Yale. When she awakes as the sole survivor of a multiple homicide, presumed a drug deal gone wrong, she is given an unlikely offer. Come to Yale, join the House of Lethe and oversee the rituals of the other…

Just let me dust off this blog thing, I have a review for you! One of my anticipated reads released during lockdown was the follow-up to An Absolutely Remarkable Thing. If you read that, of course will will be dying to know what happened to…