Phanee received my first ever pre-loved giveaway and kindly agreed to share her thoughts on the book. You can read my review here and compare our opinions. Phanee is one of my favourite book bloggers so go visit her blog, Funny Wool, once you’re finished here!

Random by Craig Robertson
A review by Phanee

Random is not the kind of book I read very many of. It is a thriller and quite a different one at that, too. The main character of this book is a man known as The Cutter, a nickname he gives himself, as he doesn’t like the one the press seem to have given him. The Cutter’s way of choosing his victims really is completely random (hence the title) and that is what’s so creepy about this book. The authorities cannot figure out what motivates the killer’s and therein lies the problem. How can you catch a murderer when you don’t know what motivates him? When you can’t predict his next move? 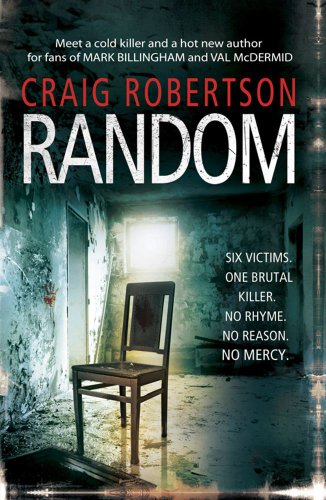 The best thing about this book is that we get to see the whole story from the killer’s point of view. We are behind the eyes of The Cutter and we see each crime unfold, from beginning to end. We see how the whole randomness thing works, how he ‘chooses’ his victims, how he does the actual killings. But what’s different is the fact that The Cutter is not all-consumed in killing people. He is calm and calculated when he performs the deed, but, other than that, seems to be able to live a normal and relatively unassuming life, too.

But still, even though the story is rather interesting and very different to other crime/mystery/thriller novels I’ve read, I couldn’t really get into it. The writing is very good, the plot is good and very well thought out, the different chapters which contain excerpts or even whole newspaper articles were a truly excellent touch, but I still couldn’t find myself being lost in the story and wanting to go on just because I really HAD to find out exactly what happens in the end.

That being said, I did keep reading it and when I reached the ending, I have to admit I was very surprised. I did not expect what I got. You get an explanation near the end (which was something I could have never thought of) and the actual ending of the book left me satisfied.

Despite the fact that I didn’t enjoy it as much as I hoped I would, it still isn’t a bad book and I believe you should just bail out on it because of my not-so-enthusiastic review. I, for one, will be on the lookout for his next novels.

The two series that broke my lockdown slump

I Know a Secret