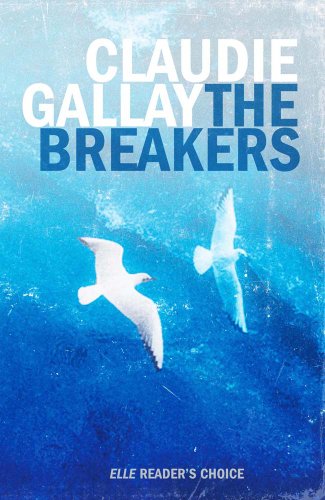 First published in French as Les Déferlantes, Claudie Gallay’s The Breakers has been translated into English by Alison Anderson (who was also the translator of Breaking Away). The novel is set in a small coastal town on Cap de la Hague in Normandy (that’s the little knobbly bit that sticks out into the sea near Alderney). The narrator arrives to observe the migratory birds of the region but finds herself observing the locals too who have suffered great loss at the hands of the sea.

The characters are an odd assortment, perhaps the result of being such an isolated community ruled by the sea. The narrator is not the only person that doesn’t belong, a man had returned to sell off his family’s old home, many years after they died at sea. However he doesn’t believe the story of their death and sticks around in the hope that the locals will tell him the truth. There is a sense of being an outsider to the story, never quite feeling involved with the lives of the inhabitants of La Hague. Perhaps this is the best way for their secrets to be observed.

The sea shapes this novel, not only as the setting for a tragedy but it also sets the mood. The sea is ever-present, in a similar way to Daphne du Maurier’s writing and I think fans of hers would enjoy this. It is strange to think that’s it’s only the other side of the channel but it is considered the cold north of France, yet here is the sunny south of England!

The subtleties of a blossoming relationship were beautifully done, the way a scarf smells, the slight touches, the small moments that would mean little outside of the relationship. All this added to a quite intimate portrayal of the narrator despite her isolation from the other characters. The inclusion of third person narration now and again added to this intimacy, though the you in question was never fully explained. I think the overall idea of a lost loved one was clear though.

Another enjoyable and beautifully written translation. The slight disassociation I felt to some of the characters made me read a little slower and hence the less than perfect rating but definitely a wonderful coastal themed read.

The Breakers is currently available in hardback from MacLehose Press and will be released in paperback in the UK in August. Thanks go to Quercus for providing me with a copy to review.

The Best Book in the World

Even if StoryGraph has gotten better I still haven't forgiven it for importing all the wrong editions of my books. It was also a bit lonely.

Get to Know This Fantasy Reader - I was tagged by @alitescape to answer some questions on my fantasy reading. https://t.co/YwrEZYhA8J