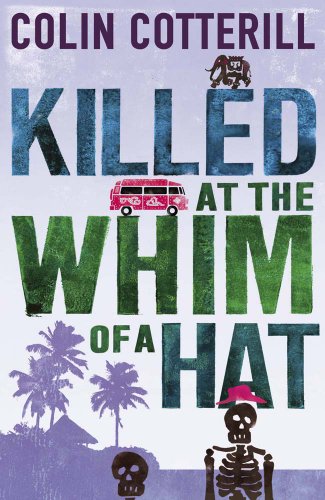 Jimm Juree is a crime reporter, working her way to the top with national Thai newspapers until the day her mother sells up the family shop and buys a holiday resort on the Gulf of Siam. There’s not a lot of news in the small fishing village she now calls home and she’s soon fed up of eating fish. When two skeletons are discovered buried underground, Jimm can smell a story and begins an investigation posing as a big city reporter helping the police. Then when a monk is found dead, all the connects the two cases is the presence of a hat.

It’s a real entertaining read with a cast of unusual and interesting characters there are never taken too far into farce. It’s a great slice of modern Thailand, a country where tradition meets technology in every day life. There’s Jimm’s brother who is now her sister,embroiled in a number of internet scams and dubious websites and her body builder brother who is eternally single. Her mother who lovse the stray dogs of the neighbourhood and trying to matchmake Jimm with the less than inspiring locals.

The title is taken from a George Bush quote where he got his metaphors mixed up. Each chapter starts with a quote from the ex-president which seems odd at first but it is explained.

The author, Colin Cotterill, is an Englishman who now lives in Thailand. I think his outsider perspective is the ideal way to observe some of the idiosyncrasies of the country’s way of life. I will definitely be reading more of his books (and lucky me, Quercus has just sent me Slash and Burn).

Killed at the Whim of a Hat is currently a standalone novel but I believe a series is planned. It’s currently available to buy in paperback in the UK. Many thanks to Quercus for sending me a copy to review.