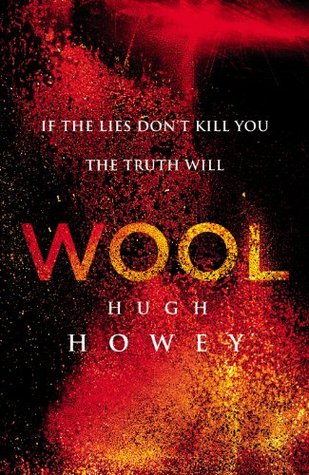 Whatever you do, don’t say you want to go outside. Holsten is the sheriff of a silo; an underground city keeping its inhabitants safe from the inhospitable outside world. Those living up top see the barren landscape only through the surveillance cameras which can only be cleaned when the worst happens. When someone is sent outside. No one ever fails to clean the cameras, not even Holsten’s wife who he lost years before.

This edition of Wool is really five separate novellas bundled as an omnibus. The first three books serve as tableaus in the lives of three very different inhabitants. Part One: Holsten follows the sheriff as he discovers more about what happened with his wife. Part Two: Casting Off plunges into the depths of the silo as the mayor and her deputy sheriff take the long journey down to maintenance at the bottom of the silo. Part Three: Proper Gauge picks up with Juliette finding her feet up top. I kind of liked this structure however Part Four: The Unravelling and Part Five: The Stranded become much more about the community of the silo, interactions between people and the politics of the world.

The characters, however brief their role, were all well-developed. There’s one scene where Bernard seems a bit inconsistent with previous actions but otherwise I though the characterisation was one of the strong points. I really cared about what happened to them all and they kept me reaching out for the next book. And I sort of loved the sinister nature of the IT department.

A lot of the online reviews for Wool have been bandying round the word unique. In contrast I feel it has a classic science fiction vibe to it, which isn’t bad at all. But it’s not ground-breaking stuff. The dystopian world itself is well thought out and it nicely plays with the cliché of the lies governments tell about the outside world. I had started off thinking it was all a bit too clichéd myself but it turns the idea round on its head at times. There aren’t any obvious holes in the politics and it’s good to see some dystopian fiction where the broken world isn’t just a trendy back-drop to a different story altogether. I didn’t really get a sense of the silo in the first book but when the mayor and deputy head downwards in book two; I loved the idea that it was a mission to visit the other end. They have to take the stairs! Down over 100 levels, with a vast sense of scale.

So I did enjoy reading Wool but I can’t pretend it is flawless. The fact that it was written as five separate novellas doesn’t help matters when it’s packaged as a novel. The first book is really just a short story and the prose is clunky. I found myself having to re-read the first few pages because it just wasn’t natural to read. The ending rescues it; the ending is just brilliant and I can understand why his early fans begged him to write more. There’s a reliance on similes which continues on into book two where too much attention was drawn to otherwise subtle actions, making it a bit predictable. It’s not until book three where Howey appears to find his stride and the writing style improves. Reading them together causes some pacing issues; just at the moment where the story should be at its exciting climax in book five, there are a lot of slow descriptive passages. When reading them separately, this may not matter but it was a little off-putting for me.

The frustrating thing for me as a reader is that the above could have easily been fixed with the good, old-fashioned editing process that a traditional publisher usually provides. It’s a worrying trend that publishers are picking up internet hits and releasing them in the wild with little more than a snazzy new cover. Now, Random House only bought the UK rights so it might be a little awkward to have two versions of the book available depending on where you live. The word-of-mouth buzz is still circulating and I can understand they don’t want the book off the market for too long (if you live outside the UK you can still buy the self-published version). Perhaps even Howey didn’t want to re-write parts of a series that had already proved popular.

If you can look past the editing issues, Wool is still an entertaining read. It will be published in the UK in hardback and ebook formats by Century, an imprint of Random House, on 17th January 2013. Thanks go to the publisher for providing (a very lovely) copy for review.

Interview with the Vampire: Claudia's Story